UEW And Its Woes 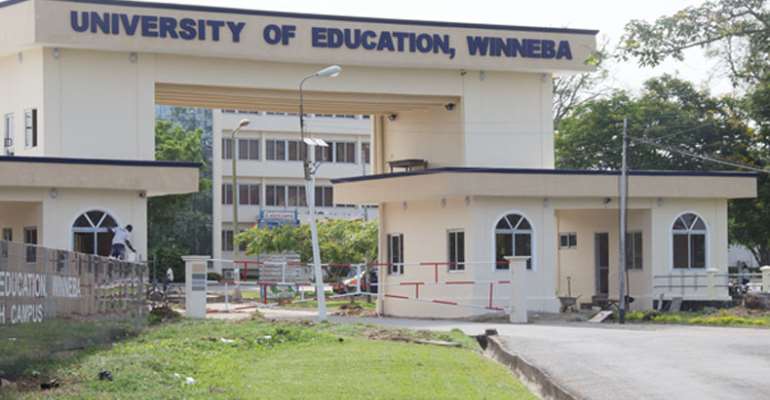 Napoleon once said “The world suffers a lot. Not because the violence of bad people. But because of the silence of the good people”. I blame myself and some people I know for keeping quiet on the issues of University of Education (UEW) for a long time. Since NPP assumed office in 2016 UEW has not known peace. The schools image is continuously traded for somebody’s parochial interest and we have all turned a blind eye on it. Whenever I read about UEW in the media I regret voting for NPP and I feel very disappointed that call myself as an NPP member. But it’s all over now, I won’t sit down whiles my alma mater is being brought down by the same party I helped to bring to power. The party does not put food on my table but my certificates do. The more the image of the UEW is dragged in the gutters the more my certificates lose their value.

It’s very heartbreaking when you read article on the issues of UEW written by people who know nothing about how the whole issue is about, how it all started and why it has continued to persist. But you can’t blame them, this is what happens if we buy truth with money. This is what happens when people like us for fear of losing our jobs, fear of being attacked and the love for our party decides to keep quiet whiles the world suffers. I will from now dedicate some time of my busy schedule to write in a series and take readers through the UEW issues and it surrounding matters. In this maiden write-up of the series, I will tell you what really caused the initial attack on the University by Afenyo –Markin.

So in 2013, the office of the Finance Officer (FO) in UEW became vacant. The then FO, Mr. Benjamin Komla Kpodo, had contested and won the seat for Ho Central constituency in the Volta Region during the 2012 general elections. The then Deputy Finance Officer (DFO), Dr. Theophilus Senyo Arkolie had the intention of occupying the position but there were questions on him as he was not fully qualified to be in the position.

Unfortunately after the appointment of Dr. Ackorlie as the Finance Officer, all efforts to reach him to fulfill his part of the deal by Afenyo- Markin was not successful. It was then that that Afenyo- Markin started planning his revenge. As an opposition MP he knew there was little he could have done if he had attacked so Afenyo- Markin shelved his plans hanging on hope for our party to come power in 2016.

Denial of Afenyo- Markin the opportunity to teach in the UEW.

During the era of Prof. Asabere Ameyaw (the former Vice Chancellor of UEW), Alex Afenyo- Markin was appointed as a lecturer in the University. This was a great opportunity for Afenyo- Markin as he was hoping to leverage on his status as a lecturer to become more influential among the students and the entire University community.

What was left to complete the appointment was for him to be given the courses he would be teaching. Unfortunately for Afenyo - Markin this met some resistance from some people in the department he was appointed to teach. His courses were never released to him. All attempts by him to get the opportunity to teach in UEW failed. In Afenyo’s understanding, the people who masterminded his denial included Prof Mawutor Avoke and one Ms Joyce (formerly of the Department of Communcations, UEW).

Afenyo- Markin on the other hand was relying on the benevolence of some few people around him including the Senior Patriots of UEW. Even his campaign T-shirts, is alleged, to have been sponsored by some ‘game boys’ in the Effutu Constituency. Afenyo –Markin was really struggling to match up with Eric Don Arthur in terms of Finance.

In my next article, I will inform my readers the role the NPP government and Afenyo- Markin played, including an alleged bribing of a Judges, to get the current Vice Chancellor in to office. I will also tell you how Afenyo – Markin subtly took control over the University and the subsequent resistance from the VC.