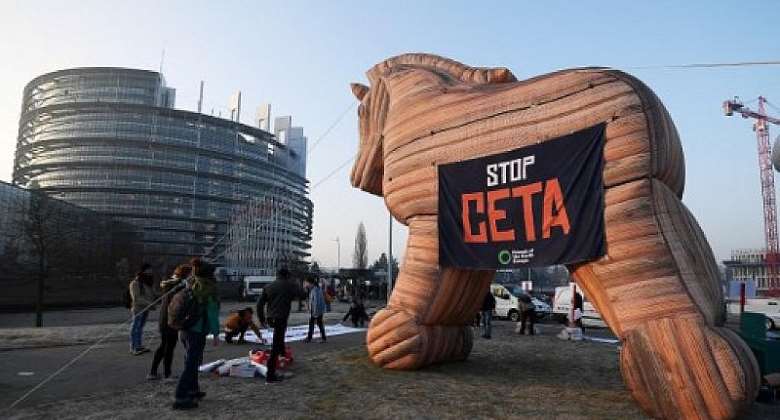 French MPs have voted to ratify the Canada-EU free trade agreement (CETA) by 270 votes to 213, overcoming opposition that said it ran contrary to Paris and Brussels' commitments to ecology and health.

The trade agreement remained controversial: 52 MPs from the ruling LaREM party abstained and nine voted against it.

The deal removes tariffs on 98 percent of goods and services between Canada and Europe, which the EU says eliminates €590 million in customs duties each year.

President Emmanuel Macron said on Monday that CETA "is going in the right direction, if it's implemented properly, to build a new commercial, environmental and social agenda".

But a broad coalition of both right, left and green MPs - pushed by more than 70 organisations (farmers unions, advocacy groups) - threatened to scupper the deal.

They argued CETA put the country's food safety and environmental standards at risk by opening markets to greater competition: destabilising the beef sector and giving huge rights to corporations.

“The problem is not exclusively that of CETA but in the accumulation of these free trade agreements,” argued a group of 25 Republican politicians in an article entitled "Let's not make food a marker of social class" published in the weekly Journal du Dimanche.

On Monday the popular former environment minister Nicolas Hulot led the charge, asking MPs to "have the courage to say no" in an open letter opposing the deal.

“We have failed to provide the necessary guarantees for a climate veto, animal bone meal, new GMOs, the safeguarding of Europe's precautionary principle. We have failed to reform European trade policy,” he said.

Canada's health and phytosanitary norms are not as strict as the EU's and there was concern in particular over animal antibiotics and animal bone meal.

Veterinary experts consulted by the government maintained until very recently that there was no way such beef could find its way onto French supermarket shelves.

But as reported in Le Monde, it was revealed just two days ago that CETA legislation does not rule out the possibility such beef could be imported to France.

Sophie Devienne, an agricultural engineer who took part in the commission charged with evaluating the impact of CETA on the environment and on health told RFI there was a lack of traceability with this meat because "the required labelling says nothing about animal feed and the absence or otherwise of animal meal and bones".

The CETA deal will now be examined by the Senate where the conservative opposition has a majority. Senators could vote against ratification but they do not have the power to block it.

CETA provisionally took effect two years ago, but needs to be ratified by all 28 EU member states to become permanent.

What again do you have for Ghanaians besides economic theori...
30 minutes ago