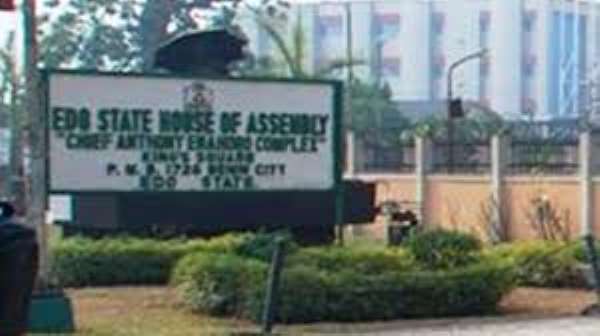 The House of Representatives recently set up an Ad-hoc committee to probe the ‘crisis’ wrecking the Edo State House of Assembly. The Abdurazak Namdas-led probe panel has completed its assignment and submitted its report with the following recommendations:

(1) That the Governor of Edo State, Mr. Godwin Obaseki, in the interest of peaceful coexistence of the state, should issue a fresh proclamation within one week in line with Section 105(3) of the Constitution of the Federal Republic of Nigeria, 1999 (as amended), stating the date, time and venue (of the inauguration), and publish in any national daily and television station.

(2) That all actions taken by the 7th Assembly members should be declared null and void pending proper inauguration.

(4) It also recommended that the that the Inspector-General of Police, Mohammed Adamu; and the Director-General of the Department of State Security, Yusuf Bichi, should seal off the Edo Assembly until a proper inauguration was conducted to provide adequate security to allay fears of intimidation and threat as alleged by members-elect.

(5) The House of Representatives threatened that the National Assembly would take over the affairs of the Edo State Legislature if the ‘resolutions’ were not complied with.

In my candid opinion, the aforementioned “resolutions” by the House of Representatives amounts to gross misdemeanor and Legislative rascality to the extent of the parliamentarians directing an elected governor of a federating unit in a Presidential System of Government to comply with its “resolutions”. My argument is anchored on the fundamental principles of the Rule of Law, the Doctrine of Separation of Powers and the tenets of Constitutional Democracy which are intrinsic values and practice in a Presidential System of Government.

I shall attempt to holistically juxtapose these “resolutions” vis-à-vis the Rule of Law, the Doctrine of Separation of Powers and 1999 Constitution of the Federal Republic of Nigeria as amended as my analytical trajectory.

According to Section 105(3) of the Constitution of the Federal Republic of Nigeria, 1999 (as amended) inter alia “Subject to the provisions of this Constitution, the person elected as the Governor of a State shall have power to issue a Proclamation for the holding of the first session of the House of Assembly of the State concerned immediately after his being sworn in, or for its dissolution as provided in this section”. The role of Governor Godwin Obaseki of Edo State as envisaged in Section 105(3) of the Constitution of the Federal Republic of Nigeria, 1999 (as amended) was to issue a Letter of Proclamation, which he did on June 17th 2019 and his constitutional duty ended there in view of the subject matter. The Constitutional duty of the Clerk of the Edo State House of Assembly, Alhaji Yayaha Audu Omogbai commenced thereafter and he did the needful with the Letter of Proclamation issued to him by the Governor Godwin Obaseki which culminated to the inauguration of the 7th Edo State House of Assembly. Nine out the of 24 members-elect were present after invitation were duly sent out to all members-elect. A quorum was formed (one-third of the members) to be able to sit, and Rt.Hon Frank Okiye was elected a Speaker. The Nigerian Constitution never provided for the re-issuance of Letter of Proclamation. A Letter of Proclamation is issued once in a life time of a Legislative Assembly and not twice, just like the University Degree Certificates. The one already issued by Governor Godwin Obaseki on June 17th 2019 is still subsisting and valid till date. Therefore, the Governor cannot issue another Letter of Proclamation so as not to set a dangerous precedent.

On July 2, 2019, a Federal High Court sitting in Benin City, Edo State, ordered the National Working Committee of All Progressives Congress, APC; the Inspector General of Police (IGP); the Commissioner of Police in Edo State, Mallam Lanre Issa-Onilu, who are defendants in an ex-parte motion of the Plaintiffs/Applicant suit filed by Alhaji Yayaha Audu Omogbai, Clerk of the Assembly and the Edo State House of Assembly on June 28, 2019. The Federal High Court order restrained the defendants, their servants and agents, not to interfere, disrupt or obstruct the constitutional duties of members of the Edo House of Assembly. The trial judge, Justice M.G. Umar ordered: “That an interim order of injunction is hereby granted restraining the defendants by themselves, their servants, agents, officers or privies from interfering with, obstructing or harassing, in any manner whatsoever, the plaintiffs in the performance of their constitutional duties as the legislative arm of the Edo State government pending the hearing and determination of the motion on Notice for interlocutory injunction. Justice M.G. Umar also barred them from further publishing in any newspaper or other media, any inciting publications concerning the inauguration of the 7th Assembly of the Edo State House Assembly and the election of the Speaker and Deputy Speaker which took place on 17th June, 2019 in the Edo State House of Assembly. The case was adjourned to 9th October 2019. The various ad-hoc committees set up by the National Assembly for the purpose of the Edo State House of Assembly is sub-judice of Justice M.G. Umar court’s order.

On July 10th, 2019, the Legislative business, official meetings and transactions of the Edo State House of Assembly included the constitution of a five-man ad-hoc committee to screen the six Commissioner nominees sent to the House by Governor Godwin Obaseki for confirmation. The six Commissioner nominees were Hon. Damian Lawani; Felix Akhabue; Moses Agbakor; Joe Ikpea; Momoh Oise Omorogbe and Marie Edeko. The five-man ad-hoc committee was chaired by the leader of the House; Roland Asoro has the Deputy House Leader, Marcus Onobun, Ephraim Aluebhosele, Emmanuel Agbaje and Uyi Ekhosuehi as members. Another Legislative transaction of that day included the first reading during plenary of a bill to establish the Edo State College of Agriculture and Natural Resources. The Speaker of the Edo State House of Assembly, Rt. Hon. Frank Okiye, thereafter appointed a former member of the House of Assembly, representing Owan West Constituency, Hon. Blessing Agbebaku, as his Chief Of Staff. All these are Constitutional duties carried out as members of the Edo State House of Assembly.

Finally, a judicial interpretation of Justice M.G. Umar will not be a bad option if the Defendants can maintain status quo pending the determination of the suit on the 9th of October, 2019. Otherwise, the remaining twelve (12) members-elect elect should perfect their documentation and present themselves before the Speaker of the Edo State House of Assembly for inauguration in the interest of the overall peace and development of Edo State.