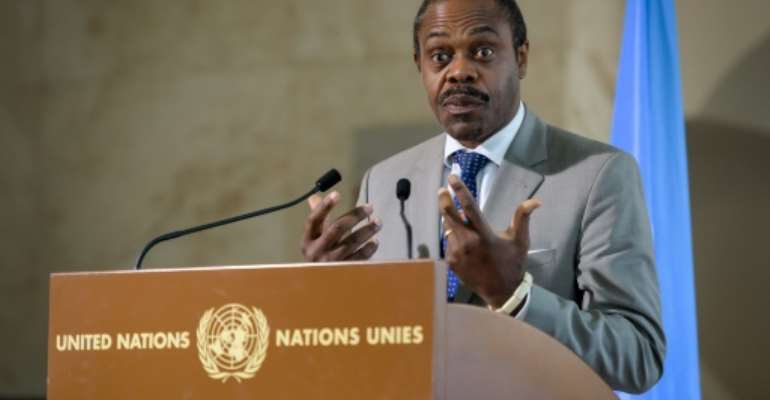 DR Congo's health minister Oly Ilunga resigned Monday, citing his replacement as the head of his country's Ebola response and concerns over a proposed "experiment" with a new, unlicensed vaccine. By FABRICE COFFRINI (AFP/File)

DR Congo's health minister resigned Monday, citing his removal as the head of his country's Ebola response and concerns over a proposed "experiment" with a new, unlicensed vaccine.

"As a result of your decision to place the response to the Ebola outbreak under your direct supervision... I hereby submit my resignation as health minister," Oly Ilunga wrote in a resignation letter to President Felix Tshisekedi.

"As in any war, because that is what this is, there cannot be several centres of decision-making for risk of creating confusion," said the letter.

Ilunga also objected to suggestions "by actors who have demonstrated a clear lack of ethics" to introduce a second vaccine to the country's fight against the highly-infectious haemorrhagic virus disease.

"Strong pressure has been exerted for several months to roll out a new experiment in the DR Congo," he wrote.

Tshisekedi on Saturday replaced Ilunga as the head of the country's response to the latest Ebola epidemic, which has killed more than 1,700 people.

Nearly 170,000 people have been given an Ebola vaccine manufactured by German pharma giant Merck since the outbreak started in Democratic Republic of Congo a year ago.

The World Health Organization (WHO) has been pushing for the introduction of a second vaccine produced by US company Johnson & Johnson, but the health ministry under Ilunga has resisted such a move, citing the risks of introducing a new product in communities where mistrust of Ebola responders is already high.

The Merck vaccine is tested but unlicensed, while the Johnson & Johnson drug is still in the trial investigation stage.

"It would be unrealistic to believe that the new vaccine, proposed by actors who have demonstrated a clear lack of ethics by voluntarily hiding important information from health authorities, could have a decisive impact on the control of the epidemic," said Ilunga, a medical doctor.

He did not refer to anyone by name.

On Saturday, the presidency announced that coordination of the anti-Ebola campaign would now fall under Tshisekedi's direct supervision.

This came shortly after the WHO gave the outbreak the high-alert status of "public health emergency of international concern".

Reporting to Tshisekedi would be Jean-Jacques Muyambe Tamfum, director of the National Institute for Biomedical Research in Kinshasa. He was a member of the team that investigated the first known Ebola outbreak in then-Zaire 1976.

Since August last year, Ebola has infected more than 2,500 people in DR Congo, killing more than 1,700 of them, in the second-biggest epidemic since more than 11,300 people died in Liberia, Guinea and Sierra Leone between 2014-2016.

Reason why Kwame Nkrumah's children were prevented from seei...
1 hour ago