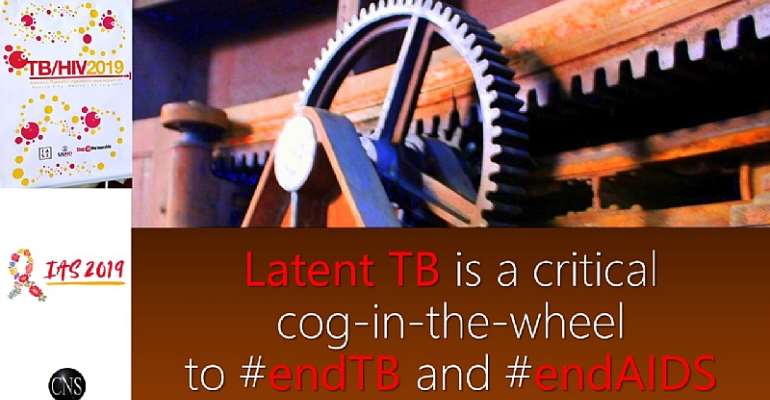 Every case of active tuberculosis (TB) disease comes from an individual with latent TB infection. And every new case of latent TB infection is a sign of failing infection control, as someone with active TB disease transmitted the bacteria to an uninfected person. Quarter of world's population has latent TB. TB continues to be the most common opportunistic infection among people living with HIV, and also, the lead cause of death. With TB being preventable, treatable and curable, we need to do a lot more to make this slogan a reality.

In addition to boosting infection control, scientific evidence is piling up that TB preventive therapy should be a standard of care to protect people (with latent TB) from active TB disease.

Hundreds of participants who attended the TB HIV Symposium organized by Stop TB Partnership with partners, before the 10th IAS Conference on HIV Science (IAS 2019) opened in Mexico, echoed a strong Call To Action to reach out to 6 million people living with HIV with TB preventive treatment.

Benefits of TB preventive TB therapy have been known since 60 years. Till recently, there has been very limited scale up, even in the target group such as people living with HIV. In September 2018 at the United Nations (UN) General Assembly, a special UN High Level Meeting (UNHLM) on TB was attended by heads and representatives of several countries globally. Promises made at this UNHLM gives hope for stronger response towards ending TB.

"TB preventive therapy is not the only activity that involves TB and HIV programmes to collaborate and work synergistically, as there are many other areas too. It is very important that right at the start of the HIV conference we get reminded that TB is the biggest killer among people living with HIV and there are tools, interventions, that are available that needs to be scaled up to prevent people living with HIV from dying from TB" emphasized Dr Sahu.

CALL TO ACTION ON PREVENTING TB LAUNCHED AT IAS 2019

This robust Call To Action, is reproduced here: "TB is not only treatable and curable but also preventable. Successful interventions over the past 50 years provide compelling evidence that ending the epidemic is feasible and achievable. The 2018 UNHLM on TB provide a historic and opportune moment for the global community to put the TB response back on track. It reminded us that ending the epidemic requires tackling broader health risk factors and determinants of the disease, in addition to traditional biomedical responses.

Today, with the advent of newer and more effective options, the scale-up of TB preventive treatment has become a cornerstone in the effort to avert TB morbidity and mortality. This was recognized by the UNHLM Declaration, which announced its ambitious goal to prevent TB in "at least 30 million people, including 4 million children under five years of age, and 6 million people living with HIV by 2022." We, the participants, gathered at the 'TB/HIV 2019 Symposium' held on 20 July 2019 in Mexico City, recognize that a new era in TB prevention is upon us. As representatives of the TB and HIV communities, we commit to push for a renewed TB/HIV public health paradigm and to advocate for the protection of people living with HIV so that no one dies of TB.

We call upon all UN Member States, organizations of the UN system, inter-governmental and non-governmental organizations, the corporate sector, foundations, donors, national governments and the international community to promote enabling environments that reduce the burden of TB among people living with HIV by scaling up TB treatment and prevention.

Therefore, we advance the following five actions that stakeholders can undertake in order to eliminate TB in people living with HIV:

1. Sustain the necessary funding for both TB and HIV: Increasing the momentum of the TB and HIV response by urging leadership from political, religious and civil society leaders at all levels to approach expenditure in health as an investment that will generate value to their societies and economies.

2. Galvanize stakeholders at all levels to ensure access to TB and HIV services and models of care that have affected individuals and communities at their core: Prioritising multi-stakeholder and coordinated HIV and TB responses as the driver for a reformed public health paradigm. Implementing evidence-based interventions, rolling out prevention services and consolidating health services towards universal health coverage. Together with HIV treatment, preventive therapy can reduce the risk of TB disease in people living with HIV by up to 90%.

3. Accelerate research and development of technology innovations, including diagnosis, treatment and vaccines: Dedicating resources, with all high-burden and G20 countries investing a proportion of their Gross Domestic Expenditure will expedite efforts in the research and development of new technologies. This will also rapidly increase the uptake of new tools to prevent and treat TB and HIV.

4. Decrease the burden of combined HIV and TB stigma: Ensuring that national programmes strike a balance between standardized public health responses and innovative solutions to better support the realities of the communities and individuals affected by TB and HIV. Honouring the rights of people living with HIV and affected by TB, and decreasing gender-related barriers, stigma and discrimination will go a long way to decreasing vulnerability to TB and HIV in all societies.

5. Commit to outstanding programmatic performance: Striving for quality and implementing initiatives that are routinely geared, monitored and evaluated towards reaching TB and HIV targets at the country, regional and global levels, including through accountability frameworks."

August 4 declared public holiday in celebration of Founders ...
56 minutes ago