The Ridiculousness And Selfishness Of Polygamous African Leaders 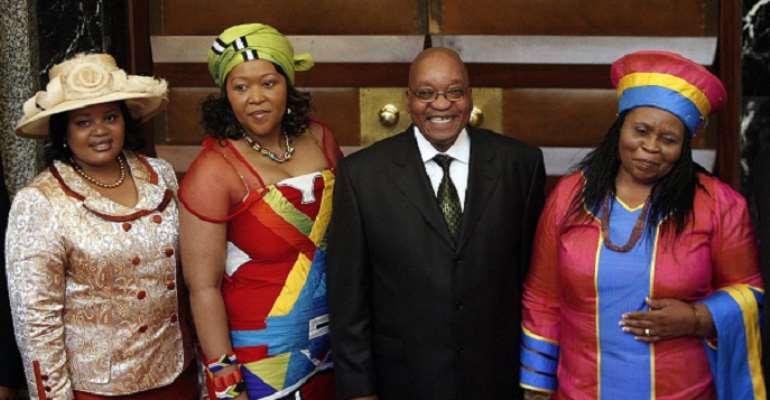 The world's poorest countries are in sub-Saharan Africa, despite the fact that the Black Continent is rich in natural resources, such as oil, gold, copper, cobalt, and diamonds, etc, the population of African countries is extremely poor, which all are blamed on the leaders.

Without votes, African leaders, ministers or parliamentarians have no chance to serve the population, the reason election campaigns mean a lot to politicians. Yet after being elected to offices, they forget all the promises they made, instead, they concentrate on how to get rich quick before anything else.

The former South African president, Jacob Zuma, has three wives. His commitment to Zulu traditions, including polygamy, brought him the sympathy of the majority of the country's citizens. In Africa, everyone understands the expenditure or the financial responsibility of a man who has two or more wives.

Taking care of three women and educating the children alone involved a lot of money, therefore, how much did Jacob Zuma earns to take proper care of his large family? Meanwhile, frustrated South Africans, who are still recovering from the psychological and emotional scars of Apartheid, are suffering from one of the highest unemployment rate and violence in the country.

Under Jacob Zuma’s leadership, it became known that he is one of the most corruptible African leaders. Hit by continuous demonstrations, he finally agreed to voluntarily resign. One of the reasons was his circle of embezzlement of state property. A few years ago, human rights activist Tuli Madonsel accused the head of state of embezzling funds from the treasury to renovate his own residence.

Jacob Zuma in a full Zulu outfit
The politician’s mansion in its 444-page report called Madonsel a “showcase of flashy luxury” amid general poverty. On the territory of the ancestral village of Zuma, where he lived with his wives houses appeared in the form of traditional Zulu huts with bullet-proof glass, a helicopter ground, a pool, an amphitheater, a pastry shop, and livestock pens. In total, $ 23 million was spent on the arrangement of the housing of the president and his family.

Another luxury accommodation belonging to Jacob Zuma in 2017, was found in Dubai. Villa L35, with 10 bedrooms, 13 bathrooms, a swimming pool and a garage for 11 cars, decorated with marble, mosaic and gold, is located on Lailak Street, one of the most expensive and luxurious streets in Dubai, reports The Sunday Times, and guess who is his neighbour on the same street in Dubai, the former Zimbabwe leader, Robert Mugabe.

Rich rulers of poor African countries can’t feed the population, can’t create work for the unemployed, can’t provide better health care services and can’t provide clean drinking water but they can afford luxurious mansions and expensive cars. Meanwhile, South Africa has the biggest HIV epidemic in the world, with 7.1 million people living with the disease, which prevalence is high among the general population at 18.9%.

King of Swaziland Mswati III
After deciding to set aside the possibility of a constitutional monarchy, the king decided for absolutism, a form of government that gives him many obligations but at the same time also guarantees him some satisfaction. He marries every year but in the early of last year, 2018, the African ruler has 15 wives and 23children.

The Business Insider reported that he has a net worth of US$200 million and Forbes also revealed that, 'The King is one of Africa's wealthiest royals. Mswati III rules over a population of about 1.3 million people but seven in ten of them live in abject poverty with incomes of less than US$2 a day.

King Mswati already has a private jet, a modified McDonnel Douglas DC-9-87, and a fleet of luxurious cars, yet as of 2016, Swaziland has the highest prevalence of HIV among adults aged 15 to 49, (27.2%), which has adversely affected the country's socioeconomic status and hindered its overall development.

King of Swaziland Mswati III
The King of Swaziland Mswati III boasts of his most extensive and luxurious properties. In 2001, he issued a decree on chastity in the country, banning girls from having sex until the age of 21. Those who broke it were fined for one cow. The king himself who issued that decree also broke the law and paid a fine after he married an 18-year-old girl soon after the right to chastity entered into force.

Already, some of his wives have committed suicide due to excessive domestic abuse

When will Africa become a continent that other part of the world will take the leaders seriously? Even though not all African leaders have the desire to live polygamous lives the fact that the population of the continent is facing many diverse obstacles, yet many African leaders don’t care much about the suffering of the people affects all African leaders. It’s sad but that’s the reality.