By Adam PLOWRIGHT and Lynne SCHOEMANN 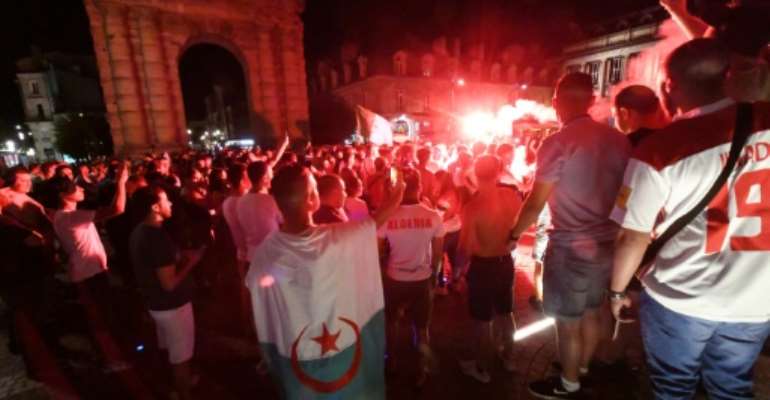 Earlier celebrations were marred by street clashes and pillaging. By MEHDI FEDOUACH (AFP)

Thousands of extra French police are set to be on duty later Friday in Paris and other major cities for the final of the Africa Cup of nations following violence that has touched off a debate about national identity.

Algeria play Senegal in the final of the African Cup of Nations on Friday evening with excitement high in France which is home to a huge Algerian-origin population due to the country's colonial history.

Thousands of people partied in the streets when Algeria won its quarter-final on July 11 and then again for the semi-final on July 14, but the celebrations were later marred by pillaging and street clashes.

"I call on people celebrating, even if I understand their joy, to behave themselves," Paris police chief Didier Lallement told a press conference on Wednesday.

Around 2,500 police officers will be mobilised around the Champs-Elysees and Arc de Triomphe where crowds set off fireworks and flew flags from car windows last Sunday, which was also France's national Bastille Day.

Clashes with police in the early hours, following pillaging the week before, saw more than 200 people arrested, leading to condemnation from the government, as well as far-right politicians. 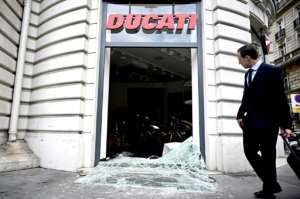 Violence has flared in France in the past after major football games involving Algeria. By Philippe LOPEZ (AFP/File)

The fact that the semi-final coincided with Bastille Day, which celebrates the French republic and its armed forces, irked nationalist politicians in particular who worry about the effects of immigration.

"Like lots of French people, I was shocked to see French people take down the French flag and put up the Algerian one," far-right politician Nicolas Dupont-Aignan said on Friday morning.

Dupont-Aignan said the French-born Algeria fans, many of whom have dual nationality, could "go back" to north Africa if their preference was for the country of their parents or grandparents.

"I want to ask these young people, who are a minority I hope: France has welcomed you, fed you, educated you, looked after you, but if you prefer Algeria, if it's better than France, go back to Algeria!"

SOS Racism, a charity, condemned his comments as unacceptable and designed to "create a chasm between people."

Violence has flared in France in the past after major football games involving Algeria including during World Cup games in 2014, which led far-right leader Marine Le Pen to propose stripping rioters of their French nationality.

"Their victories are our nightmare," a spokesperson for Le Pen's National Rally party, Sebastien Chenu, said Monday. "Whenever there's a match with Algeria... there are problems."

A France-Algeria friendly in 2001 in Paris saw the French national anthem copiously booed in what was the first meeting on the pitch between the countries since Algeria's independence in 1962.

Paris police have dismissed a demand from the National Rally for Algeria fans to be barred from the Champs-Elysees on Friday as impractical and unfair.

"For me, the people coming to the Champs-Elysees are joyous citizens," police chief Lallement told the press conference.

Many businesses along the famous avenue were taking no chances, however, with workers putting up wood and steel sheeting across the windows of shops and restaurants ahead of kick-off on Friday.

The match in Cairo is a testament to the enduring human ties between France and Algeria which was ruled from Paris for 130 years.

Algeria's squad features more than a dozen Franco-Algerians, while captain Riyad Mahrez was born and grew up in the multi-ethnic Sarcelles suburb north of Paris.

Others stress that the overwhelming majority of fans in France marked Algeria's last two victories in the Africa Cup peacefully and that many Franco-Algerians feel free to celebrate the successes of both countries.

"There are always groups of hooligans for every sports events who come and create chaos. We shouldn't exaggerate this violence," Karim Amellal, a French writer and academic with family roots in Algeria, told AFP.

But he acknowledged that some Franco-Algerians brandished their attachment to north Africa due to their sense of exclusion from France, which has struggled over decades to integrate its large Muslim population and come to terms with its colonial past.

"It's about anger, a feeling of being a victim of ghettoisation, of forgotten history, the history of their parents," he said.

Faiza Menai from Debout l'Algerie, an Algerian collective in France, recalled that France had seen six months of often violent demonstrations by so-called "yellow vest" protesters, who were supported by Le Pen and other far-right groups.

"It's a pity that there are people who show up just to cause trouble. As in the case of the yellow vests, you have these young guys who missed the point -- they come in from the suburbs and take advantage of the situation to get their revenge," she said.

Her group plans to send out volunteers in florescent orange vests to the Champs Elysees to "try to limit the damage by raising awareness among supporters and lending a hand to authorities."

I won’t bow to pressure to make Parliament a ‘rubber stamp o...
35 minutes ago