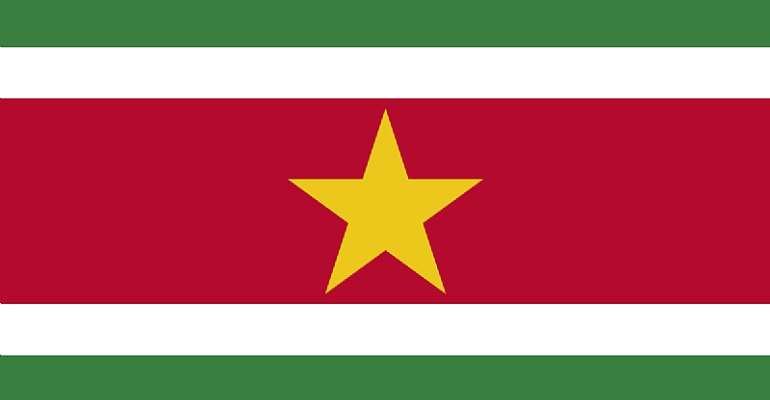 “The world must learn to work together, or finally it will not work at all” - Dwight David - 34th U. S. President

GEOGRAPHICALLY, THE REPUBLIC OF SURINAME (REPUBLIEK SURINAME in Dutch) lies on the equator on Latitude 5.063 and longitude 55.43. It is located in the South American continent sharing borders with Guyana to the West, French Guiana to the East and Brazil to the South. The Atlantic Ocean laps its coast to the North. This is what makes Geography a very interesting subject. You get enthralled knowing the locations of various countries; the peoples inhabiting them; their main occupations; their food crops; et cetera- so that you will not presume that Suriname is an island or a land-locked country, or that the people there eat raw meat as others who did not do Geography might think.

The truly national dish is rice and chicken, though culinary varieties exist, given the people's ethnic backgrounds, with the main meal eaten at 3:00pm. You cannot miss “pom and pie”. Huge amounts of food are served during the “Bigi Yari”, the jubilee year celebrations. Education is compulsory and free between the ages of six and twelve. Adult literacy is over 90 per cent. When a typical Creole tells you: “No span”, he means “keep cool”; “don't worry”. This shows the relaxed atmosphere of the Surinamese community – just as Ghanaians will respond to “Ete sen” (How is it?) “Eye bokoo” (It is cool).

The national capital of Suriname is the 300-year-old colonial town, Paramaribo, and about 280,000 inhabitants live in Greater Paramaribo, with many wooden buildings. The many churches, synagogues, Hindu temples and mosques demonstrate the multi-ethnicity of the country. Whilst the anthem is 'God be with our Suriname” (God zij met ons Suriname, in Dutch), its motto is: “Justice – Piety – Trust” (Justitia – Pietas – Fides). The official language is Dutch but other languages include: Akurio, Arawak – Lokono, Carib – Karinja, Sikiana – Kashuyana, Tiro – Tiriyo, Waiwai, Warao, Wayana – and Sraman Tongo, Sarnami, Hindustani, Javanese, Chinese, English, Portuguese, French and Spanish which are widespread and heard among the people (Indian 27.4%; Maroon 21.7%; Creole 15.7%; Javanese 13.7%; Amerindian 3.8%; Chinese 1.5%; European 1%; Others 1.8%).

In 1954, Suriname was a constituent country within the Kingdom of Netherlands, after being regarded a colony for over 400 years; but on 25th November, 1975, the country attained an independent status. Politically – minded readers may cherish the name Desire Delano Bourtese who is the ninth President having re-emerged from military leadership of the country to be an elected President. In 2000, he was sentenced to 11 years in prison for a drug-related offence, but being President appears to have given him immunity. Of course the President has always denied the charges. Soccer – minded readers may be delighted to hear of Edgar Davids, Floyd Hasselbaink, Frank Rijkaard, Patrick Kluivert, Clarence Seedorf and Ruud Gullit who was the captain of the Netherlands national team that won the UEFA Cup in 1988, and was a member of the 1990 FIFA World Cup. Gullit won the Ballon d'Or in 1987 and was crowned the World's Soccer Player of the Year in 1987 and 1989,

This was the country Otumfuo Osei Tutu Asantehene visited in November 2018 on an invitation to the 43rd independence anniversary. In Suriname, Otumfuo stated: “(We) are here on a friendly mission but we are also here to explore possible areas such as business development and investment that both Ghana and Suriname can mutually benefit from”. Otumfuo's short address was an eye-opener. It was a positive action that is expected to yield great fruits. It is simply a truism to say that Otumfuo is a development – oriented traditional ruler.

In the last Akwasidae (Sunday, 14th July, 2019) a delegation of various Surinamese ministries came to Kumasi to celebrate the day with Asanteman. It was a very great re-union of peoples who had been separated by over 350 years since Suriname was taken over by the Dutch in 1667, and about 215,000 people were taken there in the course of the Atlantic Slave Trade. Some of the Surinamese people trace their roots to West Africa (notably Ghana and Benin), and the sound of the talking drum (mpintin – as the Surinamese call it) to summon people is similar to the one we have in Asante. The slaves were given very harsh treatment by their Dutch slave-masters, and some of them “marooned” themselves, (called Maroons) escaping into the vast jungle. The Dutch abolished slavery only in 1863, but the freed slaves were required to work on the plantations to produce sugar, coffee, cocoa and cotton.

The Surinamese appear to love the colour white, and their traditional chiefs are dressed like the Ghana Navy. As part of their traditional dressing, there is always a piece of cloth hanging on the shoulder, or wrapped on the upper part of the body and tied at one shoulder. It has always been a joy seeing various important people attending one ceremony or another at Manhyia. We owe all these to the initiative of Otumfuo Osei Tutu Ababio. The delegation from Logba (near Ho in the Volta Region) was warmly welcomed. So was the delegation from the Ghana Bar Association led by veteran Paul Adu Gyamfi Esq. and Francis Kofi, Esq. whose presence was gracefully acknowledged by the Otumfuo.

The nation was represented by the Vice-President Alhaji Mumuni Bawumia and the Ashanti Regional Minister Simon Osei-Mensah and the Deputy Regional Minister, Hon. Elizabeth Agyemang. Could we leave out Honourable Osei Assibey, the Kumasi Mayor? Of course, the NPP delegation of MMDCEs led by the Regional Chairman, Antwi Boasiako a.k.a. Wontumi was very conspicuous. DCOP Kwasi Mensah-Duku could not “hide” because of his uniform, and seeing him made one recall his usual presence at the “Officers' Mess”.

On the whole, the last Akwasidae was a very simple ceremony, very comely, very educative. Otumfuo Osei Tutu had a nice word for everyone who attended it – a high display of diplomacy. This was a day for traditional symbolisms-no politicking.