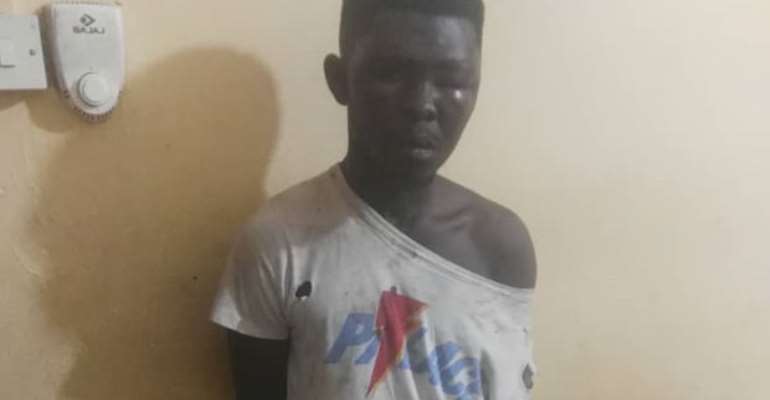 The Kaneshie Police have arrested a 25-year-old man alleged to be part of a syndicate that has been terrorizing passengers who ply the Awudome Cemetery at night.

According to the police, after attacking his victims, Isaac Appiah would jump into the thick bush inside the cemetery and hide in some of the empty graves.

Having attacked a victim, he was spotted and chased by a police patrol team into the thick bush.

The suspect is currently in the custody of the Kaneshie police assisting in their investigations.

The police officer said Appiah jumped from the first cemetery, which is currently unused, to snatch the victim's bag and entered the place again.

He said unknown to the police, an accomplice of the suspect identified as Godfred Yaw Otchere, in charge of a Toyota Corolla with registration number GX195-18, was also waiting for the suspect at the back of the cemetery to pick him away.

Superintendent Acheampong revealed that the moment the suspect emerged from the bush to join the vehicle, the two were arrested.

The police said the stolen bag contained GH¢1000, a mobile phone, a cheque book and identity cards as well as other documents.

Superintendent Acheampong said suspect has been in the 'trade' for some months and has been attacking his victims on a daily basis, adding “our investigations also revealed that suspect was lodging in a hotel and committing crime at night.

“We also discovered that suspect had a client who often changes his stolen foreign currency cash for him,” the police added.

He revealed that a total of GH¢395 was retrieved from suspect out of the GH¢1000.