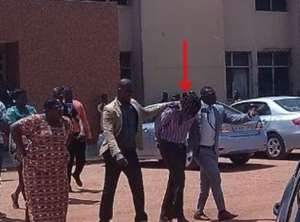 It is increasingly becoming clear that, in fact, the Office of the Attorney-General, Gloria Akuffo, did not blunder procedurally, when she appealed to the authority or jurisdiction of another Accra High Court to reverse the previous order by Justice George Buadi to allow Mr. Gregory Afoko, the prime suspect in the acid-pouring assassination of Mr. Adams Mahama, then Upper-East’s Regional Chairman of the then main opposition New Patriotic Party (NPP). In his contribution to the controversial discourse sparked by the reversal of the bail order granted Mr. Afoko by Justice George Buadi by Justice Merley Wood, the President of the Ghana Bar Association (GBA), Mr. Anthony Forson, is reported to have granted a radio interview in which this notable legal light observed that the judge of the second Accra High Court which reversed the earlier bail grant to Mr. Afoko, that is, Justice Wood, did not err in her judgment because Justice Wood had been presented with a new set of damning charges against the defendant, and not the same charges that had been preferred against Mr. Afoko since the beginning of his trial (See “GBA Prez Condemns the Violation of Afoko’s Rights” Modernghana.com 7/17/19).

In other words, when Justice Merley Wood handed down the judgment or verdict that saw Mr. Afoko’s bail grant summarily abrogated, she was not doing so on the patently unwarranted basis of dishonoring or contemptuously disregarding the verdict and/or coordinate authority of a fellow member of the august High Court with equal statutory or constitutional powers of adjudication. Instead, Justice Merley Wood squarely predicated her denial of bail to the prime suspect in the Adams Mahama assassination case purely on the basis or strength of the fresh evidence provided to her court by the Office of the Attorney-General. So, what the interested and/or vested critics of the case ought to be presently discussing with gusto are the details of the new charges, if such details happen to be publicly available. And if they are not publicly available as yet, then these critics ought to pray for the court to expeditiously make the same known to the anxious public as soon as possible.

Of course, this may very well not happen as fast or quickly as publicly expected, since the Afoko case is still in progress or under prosecution in court. What we clearly see here is the abject hypocrisy of those who had kept deathly silent while ex-President John Dramani Mahama scandalously and virulently, as well as vituperatively, rode roughshod over and above the authority of Georgina Theodora Wood-presided Supreme Court of Ghana, in the matter of the Montie Trio of diehard Mahama propagandists who had been legitimately sentenced to imprisonment for criminally disrespecting the Apex Court. That was what a real violation of judicial independence looked like. And yet, the same people who saw absolutely nothing wrong with the flagrant scofflaw anti-judicial nose-thumbing policies of former President Mahama would now have the rest of the world believe that it is President Akufo-Addo, more than any other Ghanaian leader, who is inexcusably guilty of the criminal violation of the statutory powers and independence of the country’s judicial system.

It is also not clear to me, why media talk-show hosts and news anchors like Mr. Daniel Dadzie, Joy-News’ Super-Morning Show’s personality, seem to be of the firm belief that, somehow, a criminal suspect of the most heinous caliber or status, such as Mr. Afoko, deserves to be inalienably and inviolably allowed to “enjoy his freedom.” Precisely what sort of “freedom” is the Joy-News’ host and anchor talking about? You see, Dear Reader, the greatest problem presently being experienced by avid lovers of Fourth Republican Ghanaian democracy, is the menace of prematurely ejaculating critics who seem to be far more infatuated with hearing themselves vacuously wax eloquent and narcissistically than deeply pondering the contents of what they have to contribute to just about any subject of public discourse.

Bawumia Is Making Comedians Jobless With His Economic Jokes ...
2 hours ago