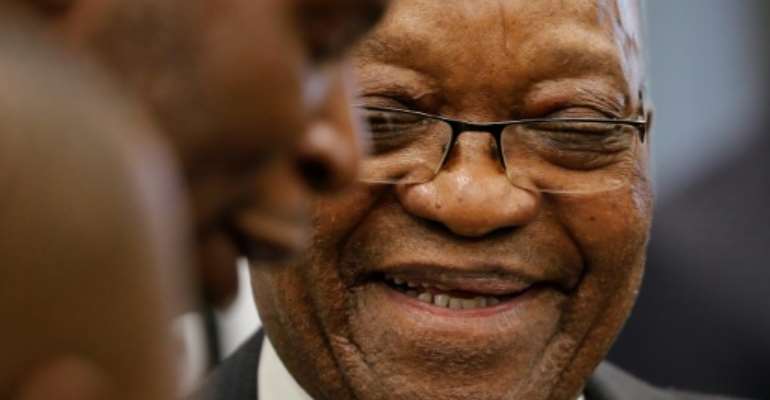 Zuma, pictured on his third day of testimony before investigators probing alleged corruption during his presidency. By Kim LUDBROOK (POOL/AFP)

A South African panel questioning former president Jacob Zuma over alleged graft during his time in office suspended work Wednesday after he complained that the questioning was too harsh.

"We adjourn the proceedings until Friday morning, I am confident that there are reasonable prospects that ways could be found to address the concerns by the former president," said Deputy Chief Justice Raymond Zondo, chairing the investigation.

Government officials and businessmen have been appearing before the so-called Commission of Inquiry into State Capture over the last 11 months in Johannesburg.

Previous witnesses have given damning evidence against Zuma, portraying his nine-year presidency as a time of mass looting of state assets.

He was ousted by the ruling ANC party in 2018 and replaced by his deputy, Cyril Ramaphosa.

Zuma, who started testifying on Monday, has rebuffed all accusations of wrongdoing and said he and his family had received death threats after his first appearance.

On Wednesday, he complained of unfair "interrogation" as he was quizzed over the appointment of a high-ranking official he allegedly imposed on a state-owned company.

"I have a problem because I'm being made to go the through details... I'm expected to remember every other detail on the work generally is done by DGs and officials," a flustered Zuma told the commission.

His legal team said Zuma, 77, had apparently been brought to testify "under false pretences."

"My client is clearly being cross-examined," said lawyer Muzi Sikhakhane.

"I want my client to consider his position -- I advised him to come here in bona fides and I do not think I was right," he said.

Zuma's testimony will resume Friday morning if an agreement between the commission and Zuma's legal team is reached.