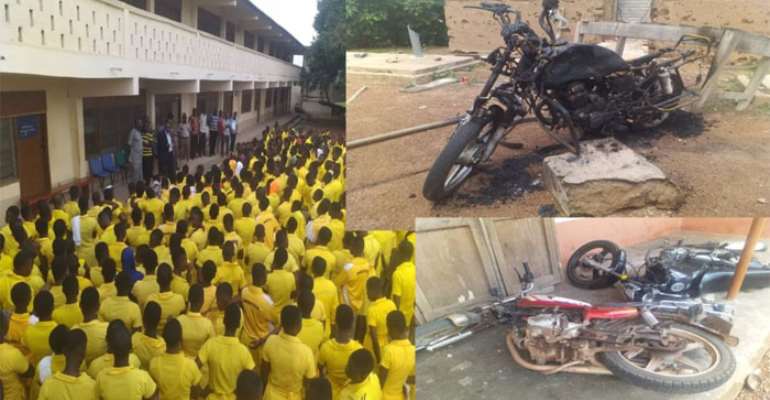 Authorities at the Sandema Senior High Technical School are likely to declare “a party for pigs” today after rioting students rejected a breakfast prepared for 986 boarders this morning.

The school was shut down about an hour ago and students asked to leave the campus following a District Security Council (DISEC) meeting today.

A clash erupted among students on the campus around midnight on Tuesday after some students refused to comply with an order to go to bed by the school's cadet corps.

Vehicles and houses were set ablaze whilst some students sustained machete wounds during the chaos. A student died from gunshot wounds and another, a girl, collapsed as police officers fired warning shots to restore calm.

“DISEC met. This morning the students refused to eat the breakfast and quite a good number of them have already left. And once they would not eat, what is the use keeping them? Yesterday, they were telling their colleagues that they don't want to see anybody in the classroom or even in the dining hall.

“True to their words, nobody went to the class and breakfast was served and nobody entered there to eat. So, our breakfast is still standing there. Some pigs will have to enjoy. Who can consume that amount of food prepared for 986 students? Surplus takers from the community are always around but they can't finish it. Breakfast for 986 students? How many surplus collectors can clear that? It's a party for pigs today,” a distressed authority at school, who did not want his name mentioned, told Starr News.

DISEC to set up Five-member Committee over Riot

The District Chief Executive (DCE) of Builsa North, David Afoko, was at the troubled school a while ago to announce to the students the decision DISEC had taken over the development.

“They refused eating and there was still tension there. So, the best decision we took was to allow them to go. They have left. Before I left there, majority of them had left; so, once they were going, there was no need I stand there.

“Now that we are all well informed, we will come back as DISEC and set up a five-member committee. We are giving the committee three weeks to come up with a report. The committee will have representatives from the board of directors of the school, security services, the district assembly and the Ghana Education Service. We have given the students two weeks to come back. They will be reporting on the 30th of this month,” the DCE told Starr News.

Meanwhile, the National Peace Council has condemned disturbances, saying violence is never the path to go in resolving conflict no matter the cause of the row.

“Any form of violence is condemnable. We know that there is no conflict that cannot be resolved. In a school where there is a school management and a student representative council, there is no way a conflict cannot be discussed and resolved.

“The resort to violence is always the wrong move. No matter the reason for the riot, there is always an opportunity for a peaceful way of resolving it. We will wait for details to know what kind of advice we will give on the situation,” the Upper East Regional Secretary of the National Peace Council, Ali Anankpieng, stressed on Wednesday.