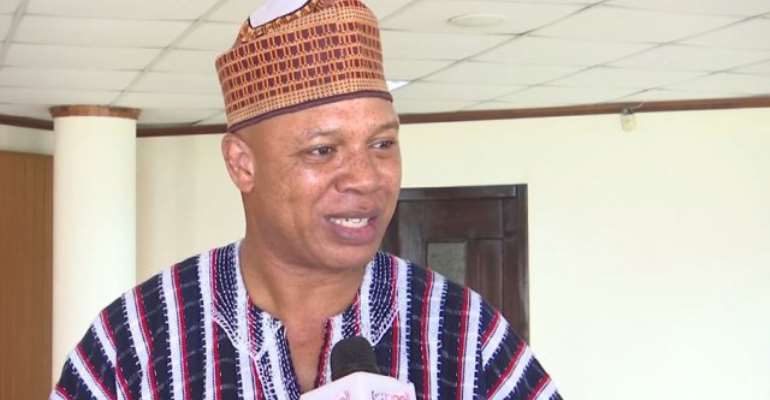 The Savannah regional Communications Director of the New Patriotic Party, Mohammed Issah has accused the member of Parliament for the Damongo constituency, Honourable Adam Mutawakilu of being the brain behind the missing Toyota Hilux pick-up vehicle with registration no. ER 3516-19.

According him, while the Regional Communications officer of the NDC purports the car was robbed at the residence of the said occupant, the Member of Parliament of Damango, Hon. Mutawakil Adam and his aide contends the vehicle was “stolen” on the Tamale-Bolga road.

They have therefore called on the Regional Police command to invite the Member of Parliament and leading members of the NDC to assist in the retrieval of the vehicle.

Read Full Statement Here:
PRESS CONFERENCE BY THE COMMUNICATION DIRECTORATE OF THE NPP IN THE SAVANNAH REGION – 16-07-19

Ladies and gentlemen of the media, on behalf of the New Patriotic Party in the Savannah Region, I wish to welcome you all. Let me also thank all of you for honoring our invitation despite the short notice. We have invited you here this morning to serve as a vehicle that will convey the official position of our beloved party to the general public concerning the decision of the NDC to make the Savannah Region ungovernable.

FACTS ON THE MISSING PICK-UP
Mr. Sulemana Illiasu and the Savannah RCC accountant, Mr Alhassan Mohammed Mubarik reported to the police, that on 4th of July, 2019, the Savannah Regional Minister Hon. Adam Salifu was traveling to Accra by flight for a meeting and parked his Toyota Hilux pick up with registration no. ER 3516-19 at his (Iliasu) house. On 6th of July, 2019, at about 9:00pm two armed men wielding AK 47 riffles came to his house and took the aforementioned vehicle away.

The Robbers also took away the victim’s iPhone 7plus and Samsung A6plus mobile phones and cash of GH200.00 and took him to an unknown location where they dropped him off and went away with the vehicle. The Police are currently investigating the said matter in its advanced form.


EVIL MACHINATIONS OF NDC
In the desperate attempts by the ndc to confuse themselves, they have staged contradictory accounts of the incident. Whiles the Regional Communications officer purports the car was robbed at the residence of the said occupant, the Member of Parliament of Damango, Hon. Mutawakil Adam and his aide contends the vehicle was “stolen” on the Tamale-Bolga Highway.

The ndc Regional Communication officer ignorantly questioned the reason the said Toyota Hilux was not branded. This man has consistently proven his lack of appreciation of simple governance and security rudiments.

Has he wondered why no government appointee brands his/her assigned vehicle? For the avoidance of doubt, the said vehicle was specifically assigned/detailed to the Regional Minister. It was not branded for security reasons.

This is a normal practice in our daily governance structure. Maybe the ndc would advise candidate Mahama to brand his vehicle so it is identified everywhere he goes. That is the extent of insanity and absurdity we are been invited to.

From the creation of the Savannah Region, there have been several attempts by the ndc to attract negative media attention to the soil of the Yagbon state. We therefore have course to believe, that from every indication, the successful creation and inauguration of the Region has from onset given candidate Mahama and his ndc sleepless nights. Hence, their deliberate attempt to sow seeds of discord in the Region just to promote their partisan parochial interest.

Respected citizens of Savannah region, it is highly imperative to state that our infant Region requires the support of all citizens of our great kingdom irrespective of our age, sex, ethnicity, political coloration or any other sectional division in order to catch up with its peers. It therefore came to us as a surprise that any reasonable citizen of this land will deliberately join in a campaign to pull back the Region.

Today we are told that series of demonstrations are been scheduled in the coming days with some groups countering the other. Whiles one group is seeking to protest against the RCC, the other one is seeking to stop the former from destabilizing the Region. It is our strongest believe and convictions that these upcoming developments are not healthy for a young region like ours which is seeking to accelerate the pace of its development.

We will therefore like to ask the following legitimate questions for answers.

Where was this group when the people of the Savannah Region wept for a Region under their own Son, now candidate Mahama?

Where was this group when our overlord, Yagbonwura and his people needed portable drinking water?

Where was this group when candidate Mahama and his brother deceived the people of Salaga with a jamboree in an attempt to do the Salaga Road?

Should the group not be demonstrating against an ndc party that has connected only 4 communities to the national grid in the North Gonja District?

Should the group not be demonstrating against candidate Mahama, who has earned for Savannah Region an enviable record of scoring the lowest (48%) in extension of electricity for all the power he has enjoyed?

The fufulso-Sawla road which has since deteriorated was meant to be asphalt throughout with a dual carriage way at various main towns as part of the original contract signed in 2008. None of these came to pass. Candidate Mahama and his MPs on the said stretch of road miraculously ensured this never happened.

This so called youth group may have flown with our SADA guinea fowls to Burkina Faso then. They never saw it.

For the records, the NPP in the Savannah Region has absolute confidence in the Police on the matter of the missing pick-up. We trust they shall retrieve the vehicle wherever it may be.

We conclude again by reiterating our stand, that the Police must take keen interest in the activities of Hon Mutawakil and his office. They have all it takes to retrieve the vehicle. Again, we are warning the ndc to keep away the intended evil machinations or we meet them with all the strength in this world.

Meanwhile, the NDC in the Savannah Region is also giving the Regional Minister a 5 day ultimatum to produce the pickup. In a statement released earlier today by the party's communication bureau signed by the communication director Mr. Malik Basintale,the NDC stated that the party won't accept "Cock and Bull Stories and that the minster must produce the missing RCC vehicle or face partied wrath.

The four-page statement signed by its Communication Director,Mr.Malik Basintale,the NDC describe as unfortunate the deliberate refusal to make official public disclosure and the internal directive to remain uncommunicative on the matter by the RCC coupled with the confusing narratives and half-baked stories.

The missing vehicle was part of the eight vehicles presented by President Akuffo-Addo when he inspected the site for the construction of the Savannah Regional Coordinating.