A Judge Let Rosewood Queen Off The Hook — Prosecutors 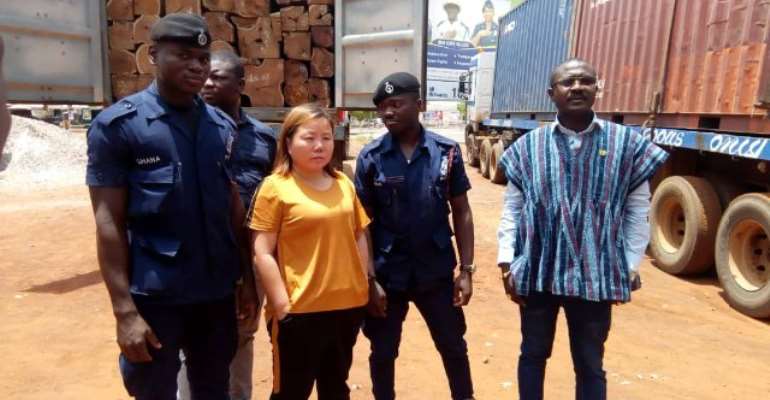 The prosecutors insist that contrary to Justice Twumasi Appiah’s claims, there was a charge sheet before him at the material time that he made the ruling, which he ignored.

State and police prosecutors say the judge took the decision in spite of their protests.

The charge sheet read in part "Conveying from the forest without conveyance certificate contrary to regulation 62(1) of Timber resource management and legality licensing regulation 2017 LI 2254.”

It was accompanied by a statement of offence detailing the state’s case against the woman who was arrested at Vitin barrier in the Northern Region while accompanying two 20-footer containers of rosewood.

In any case, the prosecutors say even if there were no full charges brought against the accused, they had filed before the court some preliminary charges of possessing banned forestry products based on which the suspect was granted bail – which she jumped.

If the judge was minded, they contend, he could have remanded her on the basis of those charges instead of discharging her.

The police put her on their wanted list and after weeks of being a fugitive, she reappeared and reported to the police and was detained. Her lawyers applied for bail again.

But sources at the Northern regional Attorney-General’s office told JoyNews they strongly advised against granting the rosewood queen another police inquiry bail.

The lawyers were asked to apply to the court for bail since she was going to be arraigned.

“We quickly drafted a charge sheet and gave to the police prosecutors to put her before court,” the source said.

The suspect was taken to the circuit court which was already hearing the case involving the man who stood surety for her, Mohammed Bondirgbum.

Justice Twumasi Appiah, refused to hear the case, holding that prosecutors and forestry officials did not file any criminal charges against the suspect.

He ordered the Ghana Immigration Service to take over the case and investigate her visas and other travel documents to decide her fate.

The suspect was flown from Tamale to Accra and subsequently deported to China without prosecution.