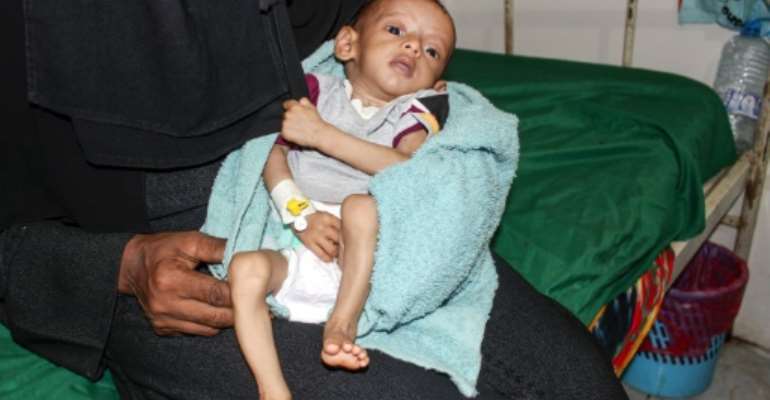 A malnourished child receiving treatment at a hospital in Yemen: a UN report said more than 821 million people worldwide suffered from hunger in 2018. By - (AFP/File)

More than 821 million people suffered from hunger worldwide last year, the United Nations reported Monday -- the third year in a row that the number has risen.

After decades of decline, malnutrition began to increase in 2015, mainly because of climate change and war. Reversing the trend is one of the 2030 targets of the UN's Sustainable Development Goals which aim to improve the planet and its people.

But getting to a world where no one is suffering from hunger by then remains an "immense challenge," the report said, noting the number of people without enough to eat had risen from 811 million in 2017.

"We will not achieve zero hunger by 2030," said David Beasley, head of the World Food Programme, one of the UN agencies contributing to the report.

"That's a bad trend. Without food security we will never have peace and stability," said Beasley, deploring that the media carry more talk about Brexit and Donald Trump than children dying of hunger.

He warned that extremist groups were using hunger and control over food supplies as a weapon to divide communities or recruit new members.

"The State of Food Security and Nutrition in the World" report was produced by the UN Food and Agriculture Organization (FAO) and other United Nations agencies including the World Health Organization.

"To safeguard food security and nutrition, it is critical to already have in place economic and social policies to counteract the effects of adverse economic cycles when they arrive, while avoiding cuts in essential services, such as healthcare and education, at all costs," it said.

A "structural transformation" was needed to include the poorest people in the world, the authors said.

This would require "integrating food security and nutrition concerns into poverty reduction efforts" while tackling gender inequality and the exclusion of certain social groups, they said.

Malnutrition remains widespread in Africa, where around 20 percent of the population is affected, and in Asia where more than 12 percent of people experience it. In Latin America and the Caribbean, fewer than seven percent of people are affected.

Adding those hit by food insecurity gives a total of more than two billion people, eight percent of whom are in North America and Europe, who don't regularly have access to enough nutritious, safe food, the report said.

The FAO said current efforts were insufficient to meet the goal of halving the number of children whose growth is stunted by malnutrition by 2030.

Robin Willoughby, the head of food and climate policy at Oxfam GB, said women were hit hardest by the rise in hunger.

"A toxic brew of climate shocks, inequality and conflict is unravelling years of progress," he said.

"If we are to meet the target of ending hunger by 2030, governments must urgently cut greenhouse emissions, provide more support for small-scale agriculture and increase efforts to end violent conflicts."

The French non-governmental group CCFD-Terre Solidaire said that in Africa and Latin America, food insecurity was affecting emerging economies as well, and not just those considered to be the least advanced.

Around 149 million of the world's children currently suffer from hunger-related growth delays.

At the same time, the UN report notes that obesity and excess weight are both on the rise in all regions, with school-age children and adults particularly affected.