The inquiry shining a light on S.African graft 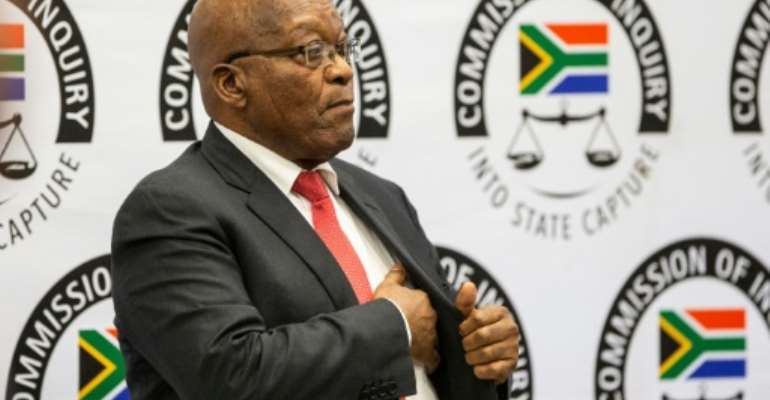 Former South African president Jacob Zuma went before a commission of inquiry that has sat for 133 days so far. By WIKUS DE WET (POOL/AFP)

On the fourth floor of a dull office block in central Johannesburg, allegations of corruption at the highest levels of government are being aired at an inquiry that grips TV audiences.

Jacob Zuma was forced to set up the commission shortly before he was ousted as president in January 2018, after he failed to overturn the instructions of the country's ethics ombudsman.

Since last August, ministers, government officials and business leaders have taken a seat at the "Commission of Inquiry into State Capture", giving evidence about graft allegedly overseen by Zuma while in power.

But the months of evidence will not necessarily lead to legal action.

The commission has no power to charge anyone and may only refer issues to the national prosecution service for possible further action.

Chaired calmly but sharply by deputy chief justice Raymond Zondo, the body's official mandate is "to investigate allegations of state capture, corruption and fraud in the public sector."

It has sat for 133 days so far, and heard from scores of witnesses, many of whom outlined allegations of corruption linked to Zuma and his associates.

On Monday, Zuma himself appeared at the commission, giving a defiant performance and denying all wrongdoing.

President Cyril Ramaphosa is also expected to testify, though no date has yet been set.

The commission is to finish collecting evidence and complete its report next year.