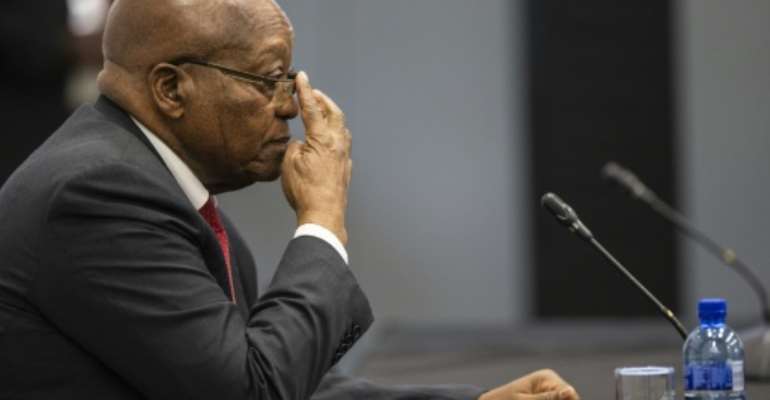 The former president is accused of fostering a culture of corruption. By WIKUS DE WET (POOL/AFP)

South Africa's former president Jacob Zuma on Monday dismissed multiple graft allegations against him, telling a judicial inquiry he was the victim of conspiracies, years of "character assassination" and plots to kill him.

In an often rambling monologue, Zuma accused unnamed foreign intelligence agencies and spies of working against him and added: "I have survived attempts to kill me."

Zuma testified at the inquiry in Johannesburg into the so-called "state capture" scandal after previous witnesses gave damning evidence against him.

He is accused of overseeing mass looting of state assets during his nine-year tenure before being ousted by the ruling ANC party in 2018 and replaced by his deputy, Cyril Ramaphosa.

"I have been vilified, alleged to be the king of corrupt people," he said. "I have been given every other name."

Zuma, who will face questioning by lawyers during an appearance that could last all week, said he had been the victim of "character assassination over 20 years."

"This commission, according to those who are implementing things, must be the grave of Zuma, he must be buried here," Zuma said.

"There has been a drive to remove me from the scene, (they) wish that I would disappear... there is this conspiracy against me."

Zuma, 77, was not legally required to attend the inquiry, but it invited him to appear after other witnesses testified against him.

Led by judge Raymond Zondo, the probe is investigating a web of deals involving government officials, the wealthy Gupta family and state-owned companies.

"This commission from my understanding was really created to have me coming here and perhaps to find things on me," he alleged.

Dismissing the term "state capture", he said it was impossible for one family to corrupt the government, parliament and the judiciary.

"It's an exaggeration, it is meant to enhance this narrative against Zuma," he said.

Sitting in central Johannesburg, the inquiry has heard from scores of witnesses over 130 days in session since last year.

"The commission is not mandated to prove any case against anybody but is mandated to investigate and inquire into certain allegations," judge Zondo said, thanking Zuma for appearing.

Zondo asked Zuma's supporters in the venue not to applause his answers.

According to Angelo Agrizzi, one of the inquiry's previous witnesses, Zuma allegedly accepted a monthly $2,200 bribe (1,951-euro) delivered in luxury bags from a contracting firm that was trying to evade police investigation.

The money was in theory for his charity foundation.

Former finance minister Nhlanhla Nene, who was sacked by Zuma in 2015, testified that Zuma pushed policies on nuclear power and aviation designed to benefit the Gupta family.

The Gupta brothers are accused of fraudulently profiting from government contracts including energy and transport deals under Zuma.

The family owned a uranium mine, which would have seen profits soar from the nuclear deal, as well as a portfolio of mining, technology and media companies.

They allegedly held such sway over Zuma that they were able to select some of his cabinet ministers.

Former deputy finance minister Mcebisi Jonas told the inquiry that the Guptas offered him the finance minister's job and even threatened to kill him after he refused to accept a $40 million bribe.

Zuma has separately been charged with 16 counts of graft linked to an arms deal from before he became president.

The Indian-born Gupta brothers -- Ajay, Atul and Rajesh -- have left South Africa and are now based in Dubai. They also deny any wrong-doing.

Eager to distance himself from the Zuma era, Ramaphosa has declared his presidency as a "new dawn" for the country and described the inquiry as a "very painful process".