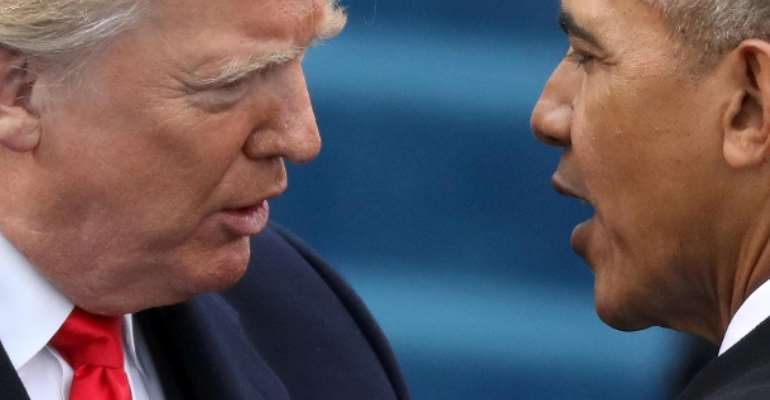 Donald Trump and Barack Obama, both in common, have a deep dislike for each other's policies. The Tension between the US and Iran seems to have reached a dangerous level. Apparently the conflict was triggered only by a whim of the acting US president.

Once again, a secret assessment of former British Ambassador Kim Darroch to Donald Trump has come to the public's attention. And again, they have it all...allegedly, the US President withdrew in May 2018, mainly because of the nuclear deal with Iran back to his predecessor Barack Obama one to wipe out. This is reported by the British newspaper "Mail on Sunday".

Britain's ambassador to US, Kim Dorroch, noted in his confidential dispatches that the US government was "relying on an act of diplomatic vandalism, apparently for ideological and personal reasons - it was Obama's deal." The then British Foreign Minister Boris Johnson had traveled to Washington at that time to convince Trump not to leave the nuclear agreement.

The Vienna nuclear agreement of 2015 was intended to prevent Iran from developing nuclear weapons. In return, sanctions and trade barriers of the West should fall. The nuclear agreement is considered one of the most important, albeit one of the most controversial, international agreements during the presidency of Barack Obama. Trump then unilaterally announced in May 2018 the US exit from the agreement. The US government tightened its sanctions. In response, Iran is no longer in full compliance.

"No strategy for the day after"
In his report, Kim Darroch went on to say that Trump's team was in disagreement over the decision. He also criticized that the White House has no long-term post-exit strategy. There is no "strategy for the" day after "," wrote Darroch. Moreover, there seems to be no plan to turn to partners and allies in Europe or the region.

US Secretary of State Mike Pompeo had "subtly distanced himself" from Trump, during talks with Johnson, consistently speaking of the President's decision. Pompeo had indicated that he had tried unsuccessfully to re-tune Trump.

Kim Darroch resigned on Wednesday after "Mail" published secret dispatches characterizing US President Donald Trump as "incompetent" and "insecure". The incident sparked a diplomatic exchange between Washington and London. Trump described the British ambassador as "stupid fellow" and "pompous idiot" and quit the cooperation because he had described the US government as "incompetent".