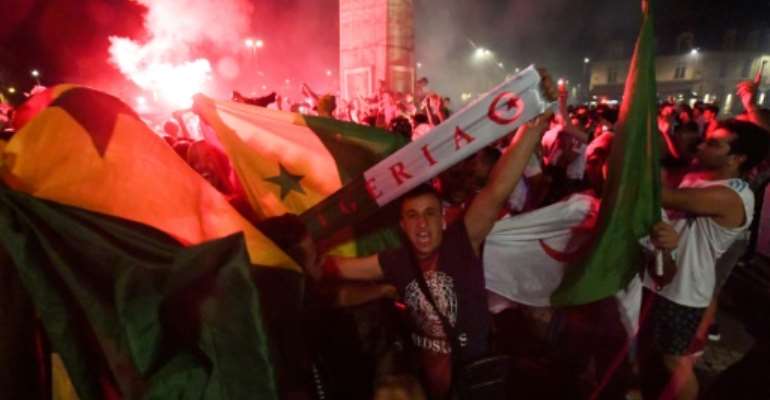 Riotous celebrations erupted around France after the Algerian football team qualified for the final of the Africa Cup of Nations. By MEHDI FEDOUACH (AFP)

French police arrested over two hundred people on Sunday following Algeria's qualification for the final of the Africa Cup of Nations, which sparked scenes of joy as well as clashes with police in several large cities.

Riotous celebrations erupted around France, which is home to large Algerian-origin communities, after the Algerian football team beat Nigeria 2-1 in the semi-final.

The interior ministry said 282 people had been arrested on Sunday night, "almost all" of them linked to the football match while some were detained on the sidelines of France's national Bastille Day celebrations.

Fifty people were arrested in the French capital after clashes broke out between football fans and police on the Champs-Elysees avenue, which was littered with broken bikes and scooters on Monday morning.

There was also violence reported in Marseille and Lyon.

After the final whistle, thousands of jubilant fans gathered in front of the Arc de Triomphe in Paris, jumping and chanting "Long live Algeria."

Many leaned out of car windows as they waved red, white and green flags, as police in helmets looked on. 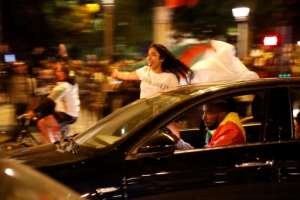 Many fans leaned precariously out of car windows as they waved red, white and green flags. By Zakaria ABDELKAFI (AFP)

In the southern coastal city of Marseille, police attempted to stop football celebrations around the historic Old Port area where 15,000 people had gathered to watch Bastille Day fireworks.

A few hundred fans of the "Fennecs", as the Algerian team is known, managed to reach the harbour after skipping police barriers. 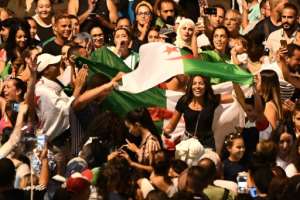 In the eastern city of Lyon, dozens of cars were torched overnight. This often happens on the night of July 14 which celebrates the founding of the French republic.

Of those arrested, 249 people were in custody on Monday.

Paris and Marseille are home to large communities of French people of Algerian origin, a legacy of France's colonial rule in the gas-rich north African country.

"Their victories are our nightmare," party spokesperson Sebastien Chenu said Monday. "Whenever there's a match with Algeria... there are problems." 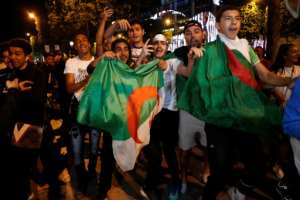 Fifty people were arrested in the French capital, with clashes between football fans and police on the Champs-Elysees avenue. By Zakaria ABDELKAFI (AFP)

On the same day in the southern city of Montpellier, an Algerian football supporter celebrating his team's win lost control of his car at high speed and ran into a family, killing a woman and seriously injuring her baby.

France was rocked by six months of anti-government "yellow vest" protests from November last year which saw thousands of people arrested in some of the worst urban violence in decades.