What Is It About The Fulani People Of Nigeria? 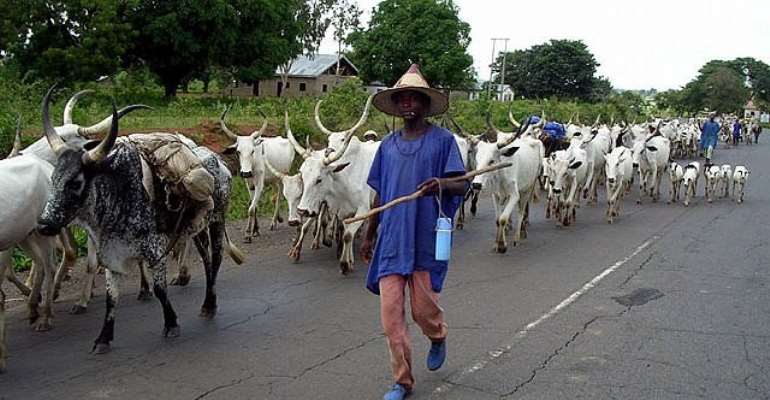 In a recent video clip that is still making rounds in the social media, a relatively unknown Abdul Azeez Suleman who claimed to speak for a coalition of Northern Nigerian groups had the impunity to give the Federal Government a 30-day ultimatum to rescind its decision to suspend the RUGA settlement policy. He even went further to threaten the expulsion of Southerners resident in the North at the expiration of the deadline, should the Federal Government fail to upkeep the RUGA plan. Since then, many Nigerians have expressed their disgust with the level of arrogance the Fulani people of Nigeria seem to be showing off – as if the entire country belongs to them alone simply because President Buhari is Fulani.

Be that as it may, I am amazed sometimes by the way Southern Nigerians appear edged in by insensitive moves made by Nigerians of northern extract, especially the Fulani. It is obvious that there is bad blood between Southern Nigerians and the Fulani of Nigeria, no matter how politicians try to give a different impression. So many agitations against the behavior of Fulani people in Nigeria are daily expressed by zealous Nigerians in the social media and gradually tension is building up again – the same way it did before the Nigeria-Biafra war that consumed 3 million Nigerian souls and properties worth so many trillions of pounds.

But we have to speak the truth to ourselves. Who are the Fulani of Nigeria, anyway and why have they become an issue in the daily lives of most Nigerians?

The Fulani people in Nigeria predominantly occupy Katsina, Sokoto, Kebbi, Bauchi, Yobe and Gombe states. A few of them can be found in Benue State. Their population in Nigeria is relatively small but political manipulators have succeeded by threat and intimidation to make the population look bigger than what it actually is.

Such threats were manifested during the Jonathan Administration when the then Chairman of the National Population Commission, Chief Festus Odimegwu was unceremoniously relieved of his post because he said he was, for the first time since the 1914 amalgamation of the southern and northern protectorates of Nigeria, going to give the country credible census figures. President Jonathan later explained that Chief Odimegwu had made statements which brought “credibility problems” to the commission. He said the population commission was critical and that one had to be mindful about the statements one made. Odimegwu’s desire to give the country credible census figures came under serious attack from particularly, then governor of Kano state, Rabiu Musa Kwankwaso. Kwankwaso even made representations to President Jonathan threatening to stop his state from voting for the Peoples’ Democratic Party if Odimegwu was not sacked.

The Fulani were known to have participated in holy wars or jihads in the 16th century which established them as a dominant social and economic force in Western Africa. To that extent, the Fulani of Nigeria have gradually become the most politically influential group among the nearly 250 ethnic groups in the country, producing more Nigerian Presidents than any other, including the current one, General Muhammadu Buhari.

One of the problems Nigerians are worried about is that the larger population of Fulani people can be found in other African countries, unlike the Igbo and the Yoruba whose only domain is Eastern Nigeria and Western Nigeria. It is one reason for the growing tension in Nigeria today. The Fulani are regarded as the world’s largest nomadic group. About 20 million of them are spread across Western Africa, residing mostly in Nigeria, Mali, Guinea, Cameroon, Senegal and Niger. They can also be found in Central African Republic and Egypt. And so, most Nigerians from the East and the West fear that once the Fulani of Nigeria are given the opportunity or once they can manipulate their way to seize the chance, they could import their fellow Fulani from neighbouring African countries to settle in Nigeria, and by the time anyone knows it, the Fulani would have taken total control of Nigeria.

It is a genuine fear that is embedded in the knowledge of the past history of the Fulani people, bound in unity by their Fulfulde language which has five dialects: Futa Toro , Futa Jallon , and Masina in West and Central Nigeria; and Sokoto and Adamawa in the East. They also speak Hausa, English, French and Arabic.

Traditionally, Fulani people are nomads. They don’t have ancestral homes or compounds like the Eastern and Western Nigerians. They are pastoral, trading people who move from place to place herding cattle, goats and sheep across a vast hinterland of their domain. But their social norms, known as “pulaaku” teach the virtues of patience, self-control, discipline, prudence, modesty, respect for others (including their enemies), wisdom, fore-thought, personal responsibility, hospitality, courage and hard work.

Compare them with Western Nigerians. And it is an open secret that Western Nigerians don’t travel or live in large numbers anywhere else, especially within Nigeria. You won’t find them in any significant number in any other state apart from Lagos and perhaps Abuja. So, they may not qualify for this discourse because they scarcely help grow the economy of any other place other than their home or overseas.

Eastern Nigerians on the other hand travel and live in every nook and cranny of the universe, including the northern parts of their native Nigeria. But one thing about the Igbo wherever they reside is that they do so much to keep the economy of the place vibrant. They are virtually the economic live-wire of any community in which they reside. And that is important.

Now, one might wonder: if Easterners comfortably live and do business in the North, why must they complain if the Northerners want to settle in the East? And if the Easterners can buy land and settle comfortably in any of the Fulani States such as Katsina, Sokoto, Kebbi, Bauchi, Yobe and Gombe, why can’t a Fulani buy land and settle in any of the Eastern States? The reason is not far-fetched.

Even in Enugu where the Fulani seem to have settled over the years and where many of them say they were born even before the civil war, some Igbo are still skeptical that at some point these Fulani would betray them in favour of a Fulani Kingdom in their ancestral home. And then they would become slaves in their own land.

All these would look like over-stretching imagination, like all the world hated the Fulani for no just reason. But that is not so. The fears are real. And the determination to halt any overt or covert attempt to enslave fellow Nigerians in their homeland in the future is real. Ghana is one country that understands the possibility and has taken immediate steps to halt the expansionist dreams of the Fulani of Ghana.

So, what is it about the Fulani of Nigeria that other Nigerians resent and find so difficult to accommodate?

Most sensitive of these is their violent nature. Despite the fact that their religion teaches them the virtues of self-control, patience and perseverance, the people are fiercely aggressive. They can kill fellow human beings with the same ease they kill their cows. They behave irrationally, spasmodically and instinctively.

Some years back, many of us who lived in the UK were baffled when we leant that these people had burnt churches and ruined so many things after a cartoonist was said to have drawn a cartoon of Prophet Mohammed in faraway Denmark. Was it Nigerian Christians who sent the Danish cartoonist to draw a cartoon of the Prophet? And yet they went on to burn churches and kill people in Nigeria for events that happened in Denmark. That was not rational behavior. About a year ago, there was a very horrible video clip which made the rounds where these people were beheading other Nigerians and throwing them into a mass grave. It was such a gory sight that days after watching the clip, I could not eat.

These people have no regard for human life and human dignity. And they differ immensely in their way of life from the Southerners. In the South, for instance, girls go to school and get married when they are adults. Among the Fulani, children as young as 10 could be married off by their parents, sometimes against their will. Underage sex is not seen among them as evil. There is a very obnoxious video clip of one of them sexing a horse with immeasurable pleasure. The possibility of contaminating other decent societies with their inhuman way of life is perhaps the greatest danger their influence portends and why the rest of the country is resisting their mad advances.

About the Fulani in Nigeria, one prominent Southern Nigerian writer says: “Fulani herdsmen are symbols of bloodshed, terror, mass murder, ethnic cleansing, genocide, carnage, torment, trauma and evil. They represent nothing other than cruelty, suffering, land grabbing, church burning, home stealing, raping and they are instruments of occupation, domination and conquest. To dedicate a page of the Nigerian passport to them and paste their picture on it represents the biggest and most gratuitous insult to the Nigerian people that has ever been served.”

Chief Sir Emeka Asinugo is the author of ‘The Presidential Years: From Dr. Jonathan to Gen. Buhari’ and publisher of Imo State Business Link Magazine (imostateblm.com)