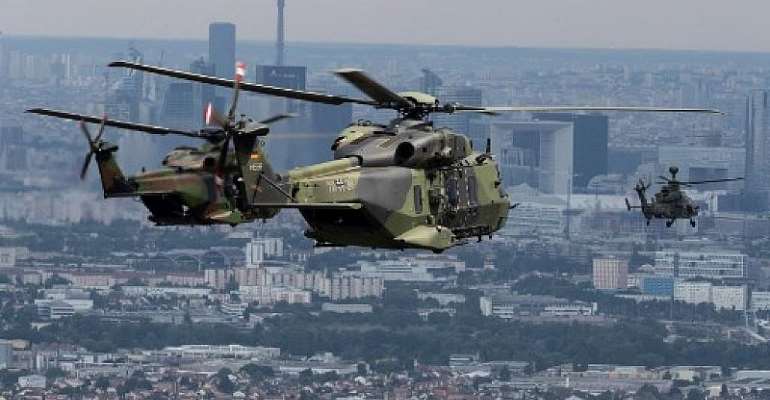 French President Emmanuel Macron is to showcase European military cooperation at the Bastille Day parade on Sunday 14 July at a time of growing tensions with the United States.

Key EU leaders, including German Chancellor Angela Merkel and Dutch Prime Minister Mark Rutte, are to join Macron to watch the annual parade down the Champs Elysees that marks the July 14, 1789 storming of the Bastille fortress in Paris in the French Revolution.

Outgoing British Prime Minister Theresa May had been expected to attend but Britain will instead be represented by senior cabinet minister David Lidington, the Elysee said.

Over 4,000 members of the armed forces thronged the start of the parade on the Champs Elysees by the Arc de Triomphe as they prepared for the ceremonial march to the Place de la Concorde where the dignitaries were to be seated.

Closer European defence cooperation has been one of Macron's key foreign policy aims and the president shows no sign of wavering despite growing political turbulence in Germany and Britain's looming exit from the European Union.

At the 2017 parade, Macron's guest of honour was the freshly-inaugurated US President Donald Trump as the young French leader sought to take the initiative in forming a bond with his counterpart.

Trump was so taken by the event that he ordered a similar military parade in Washington for the July 4 Independence Day celebrations.

But since then ties between Trump and Macron have soured over the US pullout from the Paris climate accord and the Iran nuclear deal, as well as France's new law for a tax on digital giants.

'Europe never so important'
Macron, who pushed the idea of the European Intervention Initiative (E2I) to undertake missions outside of existing structures like NATO, says European defence cooperation is crucial.

"Never, since the end of World War II has Europe been so important," Macron said in a statement to mark July 14.

"The construction of a Europe of defence, in connection with the Atlantic alliance whose 70th anniversary we are celebrating, is a priority for France," he added.

He said the aim of the E2I was to "act together and reinforce our capacity to act together," adding: "Our security and our defence pass through Europe."

Forces from all nine countries taking part alongside France in the E2I -- including Britain and Germany -- will be represented at the parade.

In a sign of France's ambition to be a leading modern military power under Macron, the president Saturday announced the creation of a national space force command that will eventually be part of the air force.

"We will reinforce our knowledge of the situation in space, we will better protect our satellites, including in an active manner," Macron said as he announced the plan, which mirrors a US initiative championed by Trump.

Highlighting France's continued commitment to NATO, the alliance's secretary general Jens Stoltenberg will also be present at the parade.

'Ultra-precise timing'
A German A400M transport plane and a Spanish C130 will take part in fly-bys at the parade, as well as two British Chinook helicopters.

The Chinooks are a major symbol of British-French defence cooperation even as Brexit looms, with Britain deploying three of the aircraft and 100 personnel for France's operation in the African Sahel region.

Also present will be members of the 5,000-strong Franco-German Brigade (BFA), which was created in 1989 as a symbol of post-war unity between France and Germany, and celebrates its 30th anniversary this year.

Merkel, who is battling to keep her grand coalition together at home, will again be under close scrutiny after she suffered three episodes of shaking at official events in recent weeks.

Some 4,300 members of the armed forces, 196 vehicles, 237 horses, 69 planes and 39 helicopters will be mobilised for the event in the heart of the French capital.