The Destruction Of Babylon The Great As Prophesied By The Prophets 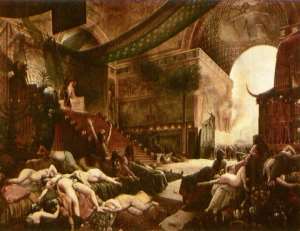 Worldwide, the faith in God is dwindling, since violence, murder, and continuous crime, have destroyed many homes and families. Many have lost their loved ones which can’t be replaced, until the fulfillment of the Holy Scriptures.

Anti-Christ forces have risen against God’s children, killing and persecuting Christians. Lies is playing a significant role in our present society, therefore, the truth is struggling to be accepted. The worship of false gods has gained ground to the extent that true Christians live in a state of confusion.

It was the worship of the false Gods in the ancient world of Babylon, God prophets, see Isaiah 13:19-22, Jeremiah 51:37, 52-58, foretold the fall of Babylon the great, an evil kingdom which had become the center for the worshipping of false gods.

Babylon was a very lively city, that was located at 70 km south of today's Baghdad, on the eternal Euphrates River about 2000 BC but by the beginning of a new era, the power of various circumstances ceased to exist.

The most famous king of Babylon was Hamurappi, who ruled in the 18th century BC and gave the country and other countries a lot of innovations and an impetus to development.

Later Babylon was conquered by Assyria, which established domination in Mesopotamia for many centuries, but by the 7th century BC, Assyria fell with the direct participation of Babylon itself. This was followed by the second golden age of Babylon with the king Nebuchadnezzar.

Babylon subjugated the whole of Mesopotamia and the Middle East. However, the country was later conquered by Achaemenid Persia.

Archaeologists discovered inscriptions in Babylon telling about intensive urban construction during the time of Nebuchadnezzar.

The so-called 'East Indian Home Inscription', which is kept in the British Museum, consists of six columns of the Babylonian letter telling speaking about the grandiose construction works undertaken by Nebuchadnezzar for the growth and decoration of the city.

This work began under king Nabopolassar, the father of Nebuchadnezzar. At the end of VII, the beginning of the 6th century BC, Charles Feinberg writes in his book “The Prophecies of Ezekiel,” Nabopolassar and his son, rebuilt this city, the ruins of which have survived to this day; it was at this time that Babylon reached the height of his glory.

The city was surrounded by swamps. The ancient authors agree on that, Layard writes, that the Euphrates divided the city into two parts. The main remains of the ruins lie to the east of the river. There are few ruins to the west of the Euphrates.

They are mainly between Hilla and Birs-Nimrud. There are no ruins in some parts of the plain, this explanation probably consists of the following, the Euphrates to this day continually changes its course and missing in the marshes to the west of the original bed.

From ancient times, obviously, the lowlands to the west of the river were subject to constant floods. According to legend, Semiramis built the embankment to prevent flooding, and one of the queens, who ruled after her, used the flood to fill with water giant lake, dug outside the city walls.

Arrian also mentions that the western part of the city lay among the marshes that served as its protection. These giant swamps existed due to moisture from the Euphrates.

In the International Standard Bible Encyclopedia, as well as in Herodotus, we find some information about the amazing size of Babylon and its fortifications.

The fall of mystery Babylon by Peter Tosh
The area of ​​Babylon was about 500 square meters. km, the length of its sides is about 22 km. The perimeter of the city is about 90 km. The city was surrounded by a 9-meter wide moat and double walls.

The outer wall was about 100m high and 25m wide. According to her, 8 chariots (or 11 modern cars) could pass in a row. There were 100 cast bronze gates in the outer wall. The hinges and locks were also bronze. 250 watchtowers towered 30 meters above the outer wall.

The fall of Babylon the Great is described by Herodotus and, in even greater detail, by Xenophon.

Having besieged Babylon, the Persians saw that they clearly could not take the giant walls by a storm or destroy the gates of the city. Two Babylonian turncoats, Gobrius and Gadat, came to the camp.

At the same time, Hrisant, an adviser to King Cyrus, noticed that the Euphrates River flows directly under the powerful walls and that its course is wide enough and deep enough for the army to pass. Cyrus ordered his soldiers to dig up huge ditches and the two defectors draw up a plan of attack on Babylon from within its walls.

While the Persians built canals to divert the river from its bed, the Babylonians continued to make fun of their enemies because of the fortress walls.

They began celebrations in honor of their gods, in which they celebrated victory over the Persians, not realizing that Cyrus had already diverted the Euphrates River from its bed under the walls of the city and at that very moment the troops have entered Babylon.