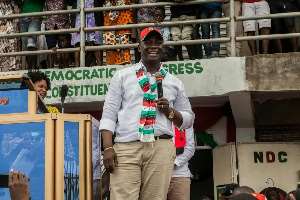 The incumbent Member of Parliament for Ellembelle Constituency in the Western Region, Emmanuel Armah Kofi-Buah, has picked nomination forms at the National Democratic Congress (NDC) office at Aiyinasi to contest the 2020 parliamentary elections.

This is the fourth time Kofi-Buah is contesting the parliamentary seat on the ticket of the opposition NDC.

The occasion, which could be described as a rally, was characterized by a procession of NDC faithful and sympathizers from the constituency who picked the nomination forms on his behalf through the principal streets of Aiyinasi amidst brass band music and dance.

Emmanuel Armah Kofi-Buah who became the MP in 2008 on the ticket of NDC and unseated the then First Speaker of Parliament, Freddie Blay, earlier decided not to contest again as NDC parliamentary candidate but some Branch Executives on Friday, July 12, 2019, picked the nomination forms for him to contest again.

Kofi-Buah has been running unopposed since 2008 but this around, he is facing tight competition.

As of the time of filing this story, five NDC members have picked nomination forms to contest Kofi Buah in the upcoming parliamentary primaries.

Addressing the media at Aiyinasi, the Branch Chairman of Azuleloanu, Alhaji Suleman Kendebekpah disclosed that Armah Kofi-Buah has done a lot for the constituents and deserve to continue the good works.

"Because of what Emmanuel Armah Kofi-Buah has done for Ellembelle at large so we the Branch Executives contributed to pick nomination forms for him to contest, he has not finished his works so we will force him to contest", he emphasized.

He commended Branch Executives and some sympathizers of the party for contributing towards Armah Kofi-Buah's candidature.

He said Armah Kofi-Buah represented change and was development-oriented who must be supported to push the development agenda of the area forward.

He charged the Branch Executives to work hard to retain Armah Kofi-Buah and bring back Former President John Mahama to redeem Ghanaians from the current hardships.