How Have We Fallen — From Grace To Greed To War 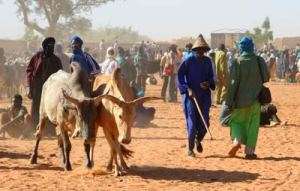 There will be another war! This time the Hausa farmers will be liberated from the clenched fists of the minority Fulani Ragu “developers” and they will be driven back by all provoked Nigerians to where Dan Fodio came from. They have been put in their place in Niger, Chad and Ghana. But Fulani have an advantage in Nigeria since the Hausa majority have been subjugated through religion. Without indoctrination of Hausa with religious opium, Fulani minority are powerless. Since ancient Mali, Dogon have subdued Fulani pastoral herdsmen infiltrating into their farms .

Fulani Ragu Government developers unlike other countries in desertification, is using religion as ethnicity to capture more land by share greed. Greed is the motive of any group furrowing into others’ land. We must face the issue of greed behind ethnic clashes in Africa. It has more to do with greed to power for political dominance by land grabbers. So, they battle within countries while the leaders and their cronies feed on the spoil of war as most of us get poorer.

Ragu “developers” never learn from the destruction of the past, this time they are back again threatening and provoking the whole Country with herdsmen. We all know these herdsmen could not afford to buy AK-41 guns to direct their cows. They do not even own the cows, the wealthy Hausa/Fulani wannabe own the cows and supplied them with guns and ammunition. They have more land but rear cows all over the Country destroying farmlands and kidnapping.

Powerful leaders behind these mayhems against Middle Belt and Southerners are sponsored by Hausa/Fulani Ruga “developers”. Each time the Fulani lose their head by monopolizing security power in order to gain land and keys to the treasury, they create Boko Haram or Maitatmasine. They swear to overwhelm the South as if they have monopoly to arms and ammunition readily available to willing buyers at the world market. So, Dogon taught pastoral Fulani lessons in Mali.

Defend yourself is a signal from their old repented Middle Belt and Southern enablers, meaning a word is enough for the wise. The Middle Belt and the South must be ready for a war by RUGA developers to liberate our fellow Hausa Nigerians from the subjugation of the Fulani/Hausa half breed leaders. You cannot be Hausa/Fulani. You are either Fulani or Hausa, the choice is yours but the Northern land belong to the Hausa and the minorities therein, not Fulani.

Muhamadu Buhari, the current President has more Hausa blood in him than Fulani but would die for Fulani dynasty over his Hausa heritage. The religious opium is so powerful it affects the Hausa in the North as well as the Christian converts in the South. When an Hausa man look at his fellow Hausa or a Christian and swear that they are Kaferi that deserve death, you know foreign religious opium is at work.

Before Boko Haram attempted murder of Buhari in Kaduna, after he defended them, Ciroma openly said they would make Nigeria ungovernable and Maitatsine went wild. None were called to order or invited by DSS until they turned against Northerners. Buhari, no prayers can solve this. All Nigerians are not Hausa conquered by Fulani with prayers. You are provoking war!

Therefore, these same Hausa/Fulani that never learned from Maitatsine and Boko Haram are at it again! They are going to end up destroying themselves too as they did in the past. However, this new menacing herdsmen terrorizing the whole Country would lose with their leaders’ head. Buhari did not learn from Kaduna attempt. It will not be limited to mayhem against Southerners alone. There is alarm throughout the South that their land is at stake and they will not roll over.

Poverty is highly concentrated within the Hausa talikawa used by elite Fulani to grab others land for Ruga “development”. According to Oxfam Nigeria, five of Nigeria’s richest men have a combined wealth of US$29.9 billion – more than the country’s entire national budget for 2017. However, about 60 percent of its citizens live on less than US$1.25 a day, the threshold for absolute poverty. Ironically, poverty population is growing especially wherever Fulani rule.

Biafra went to war unprepared daring majority of fellow Nigerians. Fulani provoking war to the point of no return, are making the same mistake. But they are not in any position to defeat the rest of Nigeria. They lack the unity Nigeria had against Biafra. If Nigerian Army cannot defeat Boko Haram and Niger Delta rebels outright, Fulani/Hausa will be foolish to take on the rest of

Nigerians. You have to be power drunk to provoke and unite the rest of Nigerians against you.

RUGA is not their goal, otherwise create Rural Grazing Areas for each State to be run for and by their indigenes. Their ambition is to conquer the whole of Nigeria for the Fulani in every African country. They already have most of the land in Nigeria. If they are really serious about ranch, Sambisa Forest is there for them to develop. Why dangle Delta oil income as “developer” in the South, when they could invest the same Southern income against desertification in the North?

If Nigeria could import grass from Niger Republic, they can grow grass for their ranches right there in the North. Each time Fulani minorities are in trouble in Nigeria, they rely on their kinsmen from other countries. Even Buhari, the President made the same claim about Fulani outside the Country entering to destroy farmland as if they were not punished for that in Mali. It used to be the Libyan rebels dislocating Nigeria at one point, now it is foreign Fulani!

It is about time Hausa woke up and realized the slumber religion had put them and their land through over the years. The South must help them reclaim their Dynasty from the illegitimate one drop Fulani/Hausa leaders. They must realize they are not the children of their fathers if they claim more Fulani blood than Hausa blood. If you want to be free of Fulani, free the Hausa.

Hausa are not the problems in Nigeria, it is the Fulani indoctrination that bestow conquered Hausa the Fulani status if they want to climb up to be their elitist ladders. So, for every Hausa that wants to prosper or lead he must assume Fulani blood in him; since they lost their Dynasty to Usman Dan Fodio. In order to be a successful leader as a Muslim, in the military or politics; Fulani relationship is a must by tulasi. Claim fake, none, one or two drops of Fulani blood.

The fact that both Miyetti Allah (sey na only Allah?) Cattle Breeders and Gharba Shehu had the audacity to contradict Osinbajo the Vice President is enough to expose Fulani chicanery. Most countries have ethnic problems from the old Czechoslovakia to Yugoslavia. So were the Saxon, Irish, Welsh and Scott. The problems in Nigeria stem from individual greed not ethnicity as widely believed. After all, the smallest Fulani ethnic group that overthrew the Hausa Dynasty leaves most of the North in poverty worse than the South. Let them try that in Mali.

The same religious drug that has been used to dispossess Hausa in the North has worked by using Christianity to create poverty in the South. While the Fulani raped and corner the riches, they have included Southern Christian leaders in the looting of their wretched country. So, when it comes to the distribution of oil wealth, the Hausa and Fulani leaders dominate while their Southern leaders aid and abet them.

Pity Nigeria, the giant of Africa, the richest country in Africa with potential regional might that supported many other black countries from Africa to Caribbean: has fallen! A country that is now despised by those it lent a helping hand. This has nothing to do with outsiders but empty pride, ostentatious haughtiness display of avarice and greed by a few that infected a whole population plugging majority into capital poverty of the world.

The author has 544 publications published on Modern Ghana.