Hohoe MCE Fight 'Enemies' With Lists Of His Achievements 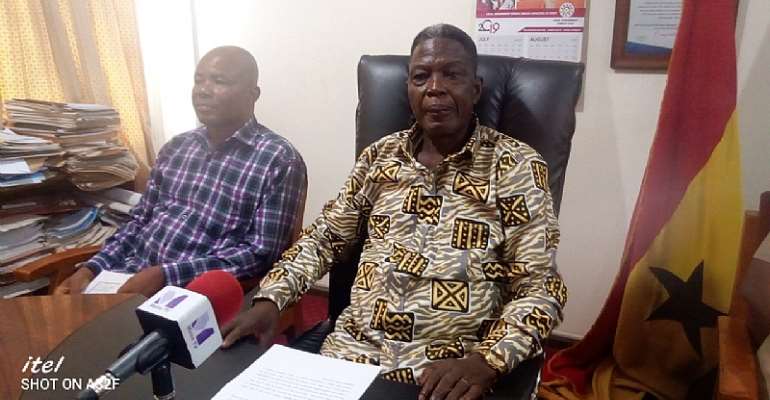 The Municipal Chief Executive for the Hohoe Municipal Assembly, Mr. Andrews Teddy Ofori, has debunked claims of non-performance and allegations of lack of transparency and accountability, levelled against him by an Assembly member, Mr. Stephen Ahlidzi and some others, he describes as 'enemies.'

Mr. Ahlidzi, the longest serving Assembly member of the Hohoe Municipal Assembly, on June 20th at a press meeting in Hohoe, called on President Nana Addo Dankwa Akuffo-Addo, to remove the MCE, over his incompetence and other allegations.

The MCE however, at a counter-press conference on Tuesday, described as misleading, non-factual and untruth, contents of the press meeting held by Mr. Ahlidzi, an Assembly member for the Gbledi Electoral Area.

He noted that the claims by Hon. Ahlidzi and his 'cohorts' that the Hohoe Municipal Assembly, under him (MCE), has not initiated any developmental projects, are inaccurate and an attempt calculated to undermine his achievements.

"To Hon. Ahlidzi and his cohorts, if there's nothing at all to boast of, through the dint of hard work, perseverance and judicious use of resources entrusted to our care, we have moved the Hohoe Municipal Assembly from no position to the enviable position of number one, among 25 Municipal/District Assemblies in the Volta and Oti regions, for five consecutive times -a feat which is unprecedented in the 40yrs history of the Assembly", he said.

According to Mr. Ofori, the financial performance of the Assembly for the year 2018, has seen tremendous improvement, an achievement borne out of pragmatic steps his administration has taken to augment the collection and blocking of revenue leakages in the assembly.

He listed among others, a 10-seater WC constructed for Hohoe E. P. SHS, Akpafu Secondary Tech. School, Afadjato Secondary Tech. School and St. Mary's Seminary SHS, a solar powered borehole for Akpafu Sokpo, Fodome Agbesia, Likpe Alavanyo, a CHIP compound at Likpe Koforidua and the drilling/mechanization of 3No. boreholes for Akpafu Todzi, Alavanyo Dzogbedze and Likpe Avedzeme, as projects initiated and completed under his watch as a Municipal Chief Executive for the Municipality.

The MCE also disclosed that, the Assembly for the past two years, have paid for contractor and supplier indebtedness mainly accrued from some 24 contracts awarded towards the tail end of 2016, by the John Mahama led administration.

Mr. Andrew Teddy Ofori, further accused Mr. Stephen Ahlidzi of probably sleeping during Assembly sessions, for which he could be pardoned for his show of brazen 'ignorance' and pretence or unaware about the development projects ongoing in the Municipality.

He concluded that his administration is committed to working to transform the Municipality to the benefit of the people in the areas of education, infrastructure, agriculture and security, without being disrupted by any individual(s) or groups, who are pawn in the hands of faceless beings.