I Believe In Primacy And Win-Win For Investors—Akufo-Addo 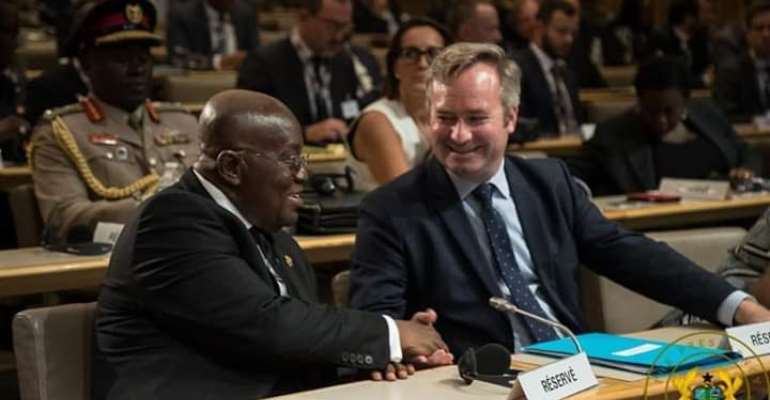 President Akufo-Addo says he will ensure that his government delivers on its promise on enhancing a win-win working environment for the country and the private sector adding that since it believes in primacy, the sector will not be disappointed.

According to him, his government is confident that numerous investors will troop in the country to boost the economy.

Speaking at the France-Ghana Business Forum on Tuesday, President Akufo-Addo said “mine is a government that believes in market principles, and welcomes investors who want to work to promote the same and help build our economy and above all, the interests and welfare of our people which are our paramount concern."

He added that his unfailing government through it coran-up exercise in the financial sector gave the banking industry a facelift as the first quarter of 2019 witnessed an unprecedented performances in total assets, total deposits and net loans as well as advances.

The 2019 March Banking Sector Report of the Bank of Ghana revealed an assessment of the sector’s work for January and February of which it emerged that there was an impressive profit, liquid and stable sector with strong prospects for increased financial intermediation.

President Akufo-Addo said "We took measures to sanitise the system, saved the deposits of some 1.5 million Ghanaians, their businesses and the people they employed, and also minimised job losses in the banking sector."

He however praised his government for its efforts in rewriting the fundamentals of the Ghanaian economy which was nothing to write home about before he took office as President.

President Akufo-Addo said, "The country's fiscal deficit, which stood at 9.3% in 2016, has been brought down to 3.9% at the end of 2018. Our actions have resulted in the rapid growth of Ghana’s economy, which, according to the International Monetary Fund (IMF), this year, will be the fastest growing economy in the world at a projected 8.8% (up from 3.6% in 2016).”

He emphasised that some measures put in place has contributed to the continuing stability of the macro-economy and the Ghana cedi's improvement adding that reduction in inflation from 15.4% in December 2016 to 9.5% in April 2019 as well as reduction of lending rates, amongst others are a host of his unprecedented achievements for Ghana andeconomy.

He however stressed that a number of taxes, which were over burdening businesses have either been abolished and some reduced.