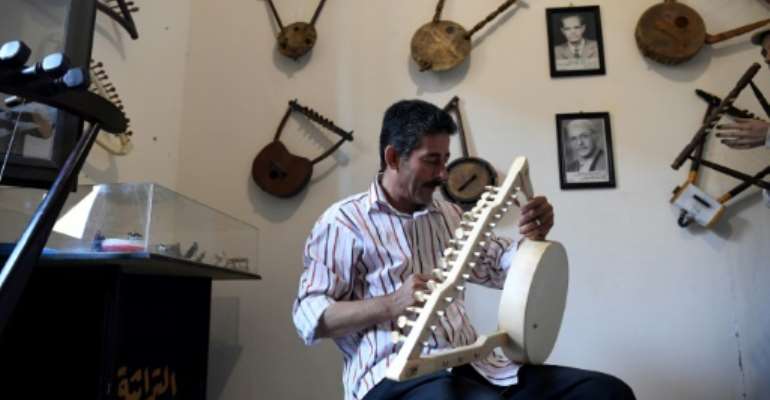 Egyptian craftsman Mohamed Ghaly adds the finishing touches on a semsemia that he made at the Canal 20 cultural museum in Port Said which he founded to pass on the musical heritage to a new generation. By Khaled DESOUKI (AFP)

When Mohamed Ghaly's workshop was reduced to rubble in February, he could never imagine that a new cultural centre dedicated to an instrument with Pharaonic roots would thrive just months later.

The semsemia, similar to a harp and made of beechwood with steel strings, is believed to have ancient Egyptian roots. It appears on ornate engravings on tombs.

Ghaly, a carpenter by trade, is one of the last craftsmen in Egypt keeping the cultural heritage of the instrument alive.

"It's an enchanting instrument that summons you in a way, and I answered its call," he told AFP.

In the last century, the triangular lyre-lookalike with a round bottom has become associated with the coastal towns dotted around the Suez Canal, especially Port Said.

It was brought over by Nubian workers who dug the Suez Canal through the Sinai Peninsula. This year marks 150 years since the canal was officially inaugurated.

The semsemia is normally played in a dhamma (gathering) with a tabla (an Arabic drum) and a riq (tambourine) accompanying as the musicians sing.

Ghaly, 52, convened a final dhamma flanked by bulldozers as his workshop in the city's famous fish markets was demolished to make way for a new shopping mall.

Mostly men of all ages played and sang through the night dancing on the rubble.

He had implored the authorities to save his workshop, where musicians jammed and he had chipped away at making semsemias for over a decade, but to no avail.

Weeks later, however, Ghaly secured a new venue for El Toratheyah -- a folk arts association he founded in 2005 dedicated to the instrument.

Canal 20, his new incarnation, is a cultural museum standing just a stone's throw away from Port Said's majestic harbour.

Its mission is to teach the woodshop craft and pass on the semsemia's musical heritage to a new generation.

Firefighter Ibrahim Awad, 35, a semsemia fan from an early age, was there on the emotional night when Ghaly had to close up shop. 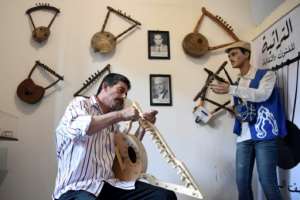 The semsemia was brought over by Nubian workers who dug the Suez Canal through the Sinai Peninsula. This year marks 150 years since the canal was officially inaugurated.. By Khaled DESOUKI (AFP)

"What I love is there isn't a band with a leader but a palpable spirit you can feel...it's really interactive," he told AFP.

When British, French and Israeli troops launched an attack in 1956 after then president Gamal Abdel Nasser had nationalised the canal, Egyptians wrote nationalistic songs inspired by their defence of the canal.

The semsemia became a musical weapon of national resistance.

Port Said, a cosmopolitan trading hub on the Mediterranean that once boasted sizeable communities of French, Greeks, Jews and Italians, was destroyed during the Suez crisis.

In 1967 when Israel occupied the Sinai, Ghaly's family was among thousands of residents displaced to other parts of Egypt.

But he never forgot his Port Saidi roots.

"I used to hear it on the radio and that made me fall in love with it. Here I was a Port Saidi away from my home -- so that left a mark on me," he said.

He started tinkering around with making his own semsemias in the 1980s.

After a musician asked Ghaly to make him one, he enjoyed the challenge of putting his carpentry skills to good use and has professionally been crafting them since 2003.

"When I am crafting it, I'm either in a really good mood or a bad one. When I'm really upset, I actually make the best semsemias. I live through the craft," he said.

'Not just for men'

Iman Haddo, 20, is part of the young crowd that gathers at Canal 20, where Ghaly displays old photographs of semsemia legends. 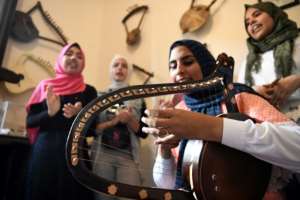 Iman Haddo (C), a 20-year-old musician, says she instantly fell in love with the semsemia when she was a teenager after attending a local concert with her father.. By Khaled DESOUKI (AFP)

She instantly fell in love with the semsemia when she was a teenager after attending a local concert with her father.

"I heard the semsemia for the first time about seven years ago. It was very strange for me, I'd never seen it before and you never see it around really," she said.

"I also questioned why it was only boys playing and asked where are the girls," Haddo said. 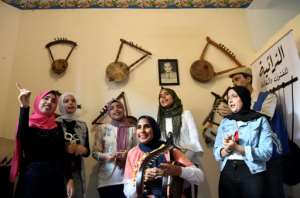 "In our local folk culture, girls would dance and perform to the tune of the semsemia but they weren't ever expected to play so I thought why not start a girls' band," she said.

They practice three times a week at Canal 20 and have been invited to play at music festivals.

"We want to show music lovers that the semsemia isn't just for men, that women can play it well and be successful at it," she said.

"We also want to save our heritage."