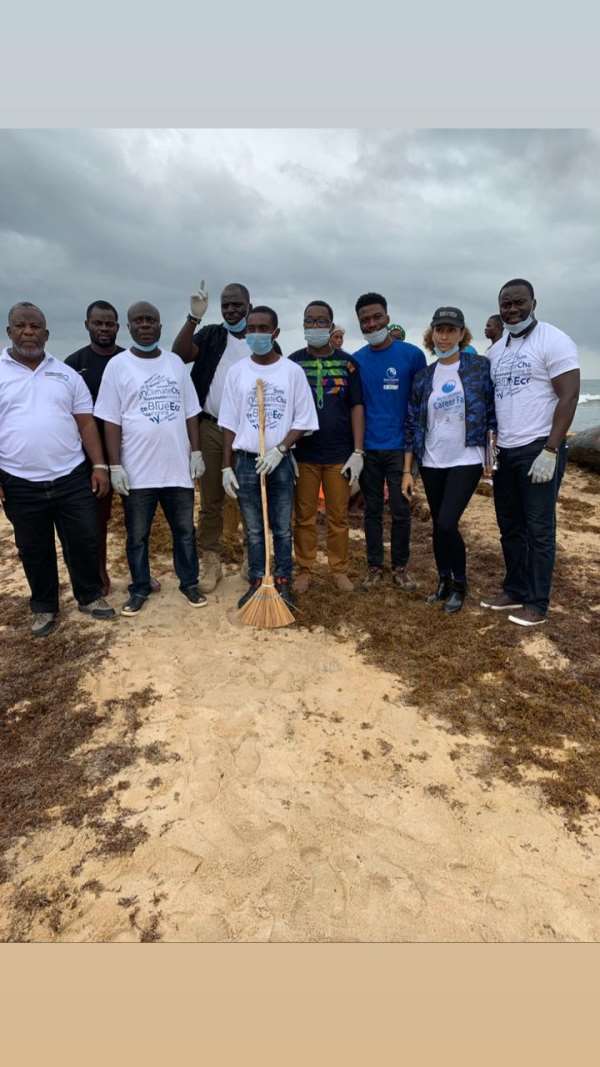 The National Steering Committee of the Blue Oceans Conference has begun implementing the “Call-To-Action” adopted by stakeholders at the March 18-22, 2019 events in Monrovia with a beach clean-up exercise.

The National Steering Committee is comprised of the Environmental Protection Agency (EPA) as Chair, the Liberia Maritime Authority LiMA) as Co-Chair, the National Fisheries and Aquaculture Authority (NaFAA) as well as its international partners, the Embassy of Sweden in Monrovia and Conservation International (CI).

The Blue Oceans team was welcomed by the City Mayor of Robertsport, Mr. J. Edwin Korha and members of the Kru-Town community. Mayor Korha and his team collaborated with the Blue Oceans team and directed them to various persons and businesses already hosting beach clean-ups like Mr. John Adams from Collaboration Management Association (CMA), Enisul Fisheries owned by Fabolia Kamara and students from the Robertsport High School.

Together, we picked up over 50 large black trash bags of plastic debris, waste and other unmentionables not meant for the ocean.

The Mayor of Robertsport, Korha and the town Chief both expressed their gratitude for the event and their commitments to beach clean-ups moving forward.

The second phase of the Beach Clean-Up is expected to take place on Friday, July 12, 2019 in Marshall City Margibi County.

Mayor J. Edwin Korha encouraged city members to keep the beaches clean and promises to support by making the tools readily available for beach clean-up teams. Groups wanting to use the tools can come by City Hall and sign the equipment out.

Local business owner, F. Kamara also encouraged beach clean-ups by offering his fishery as a place to support local groups and organizations willing to do the work.

The Liberia Surf Affiliation has already scheduled to begin cleaning the Kru-Town beach every Friday morning, and participants from B.E.S.T. Liberia will join them every other Friday. The culture of a clean beach is being encouraged and supported by all members of the community and its governing agencies.

The Blue Oceans Team which comprises the EPA, LiMA, NaFAA, the Swedish Embassy and CI reemphasized that the exercise is a demonstration of the Government of Liberia's continuous commitment to Blue Oceans Conference "Call-To-Action" and to keep beaches on the West Coast clean.

On March 21, 2019, the Government of Liberia stressed the importance of improving the health and productivity of Liberia's coast and ocean and protecting its functional integrity is key for country's future.

"We recognize that the Africa Maritime Domain (AMD) offers all African nations vast growth opportunities including several sea-lanes of enormous importance for their security and prosperity. Our partnership with the Embassy of Sweden in Monrovia and Conservation International is noteworthy in these efforts," GOL said.