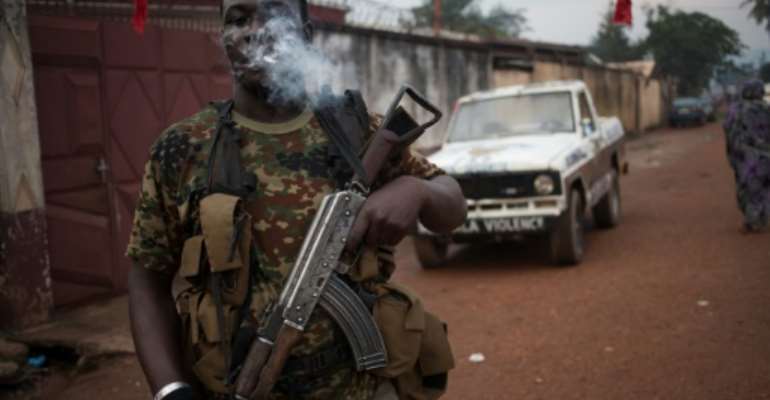 The PK5 district has become a flashpoint in the troubled country, already weakened by sectarian violence and dogged by militias. By FLORENT VERGNES (AFP/File)

The PK5 district erupted in tit-for-tat violence after a vendor was killed by a local militia.

The district has become a flashpoint in the troubled country, already weakened by sectarian violence and dogged by militias.

Imam Awad Al Karim said that three members of a self-defence group had died and that their bodies along with that of the vendor were brought Thursday to the Ali Babolo mosque.

"It started with a dispute between a petrol seller and armed youths," the imam said, explaining that the vendor did not want to pay a tax imposed by the local self-defence unit.

Two youths then lobbed a grenade, killing the 40-year-old man. The victim's family turned to a rival militia to avenge his killing, sparking clashes on Wednesday.

Gunfire between criminal groups ontinued overnight and into Thursday, the spokesman for the UN mission in CAR Vladimir Monteiro told AFP.

"We have sent patrols in the district," he added.

Medical charity Doctors Without Borders (MSF) said 26 people were recorded as injured as of late Thursday.

Shops in the area's main Barthelemy Boganda Avenue were closed and the streets were deserted, an AFP journalist said.

"It started from a simple case of racketeering. However the market is empty and people are scared," a shopkeeper said.

The distinction between fighters and civilians is sometimes difficult to draw in the PK5 district, a major economic hub which has been a battleground on and off since 2014.

It plunged into bloodshed in 2013 after the country's longtime leader Francois Bozize was ousted by a predominantly Muslim rebel alliance called the Seleka.

Former colonial power France intervened militarily from 2013 to 2016 to expel the Seleka, and then wound down the operation.

Voters’ Registration: Everyone Will Be Safe – A/R Minister A...
15 minutes ago