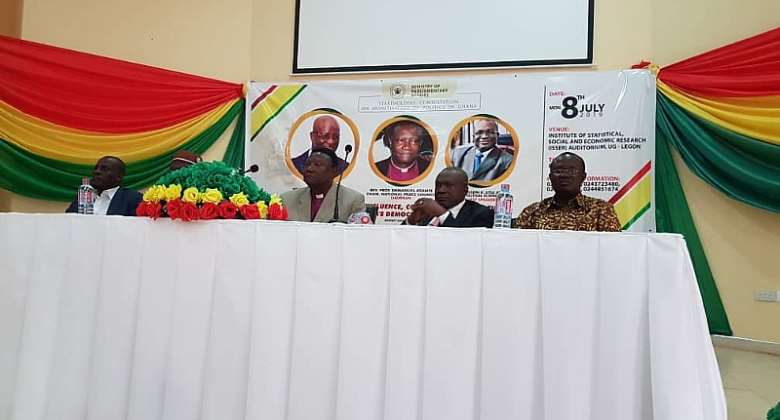 According to him, there are many people with brilliant ideas and with the good mentality to serve the nation but due to their inability dole out money, they fail to go through the initial stages within their political parties.

Professor Asante said this on Monday, at national stakeholders’ consultation forum on monetisation of politics organised by the Ministry of Parliamentary Affairs in Accra, dubbed: “Money, Influence, Corruption and Capture: Can Ghana’s Democracy be Safeguarded”.

He added that the state of monetization in politics has led to the lack of patriotism and the state capture phenomenon, and robbed the nation of its hard-won reputation of peace and development.

Dr. Evans Aggrey-Darkoh, Chief Director of the Ministry of Parliamentary Affairs, said monetization in politics is a grave concern to all democracy-enhancing institutions and individuals.

“We recognize the immense contribution of political parties to the democracy of the country but also we recognize that monetization in politics, which has encouraged elite control, corruption, and violence, has dire consequences for the sustenance of the democracy,” he said.

Mr. Osei Kyei-Mensah-Bonsu, the Minister of Parliamentary Affairs, said the forum would encourage a national discourse on monetization in politics and come out with measures to curtail the concern.

He said if care is not taken, the political position would rest on only the rich in society to the detriment of a competency-based approach, which would affect the core values of democratic governance.

The Majority Leader said the Inter-Parliamentary Union has called on Parliament to ensure that by 2025, women in its membership would constitute 30 percent.

“Even though laws and regulations were important, they require a conducive social fabric that empowers citizens and encourages accountability, and ensures proper implementation and sustainability of integrity-enhanced system”, he added.