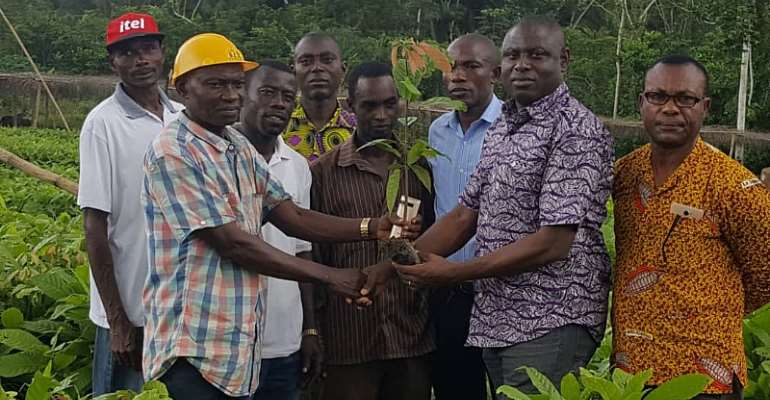 In its bid to enhance and boost the cocoa cultivation in the Tarkwa-Nsuaem Municipality of the Western region, thousands of farmers have so far benefited from free cocoa seedlings distribution from the Tarkwa-Nsuaem Municipal Assembly, (TNMA) for planting in the 2019 crop season. TNMA has distributed fifty thousand 525,000 quality and high yielding cocoa seedlings to farmers across the district enhance cocoa production in the area.

"The free cocoa seedlings distribution is mainly to support Nana Akufo-Addo's government flagship programme dubbed “Planting for Export and Development (PERD) which is a subsidiary of the Planting for Food and Jobs (PFJ) of which cocoa is an integral crop in the implementation of the programme" he noted.

Addressing Journalists in the Municipality during the distribution, the Municipal Chief Executive, Hon Gilbert Ken Asmah mentioned that the cocoa seedlings project was his administration's the vision to support the farmers across the Municipality to expand, develop and revamp their old cocoa farms to boost the internal generated revenue of the Municipality.

"Cocoa we all know is a major cash crop cultivated by the many farmers in the Tarkwa-Nsuaem Municipality and therefore the need to support them with high yielding seedlings at no cost will give the farmers a leverage and also encourage others into cocoa farming, he observed. .

Hon Asmah explained further, that beneficiaries of the free distribution of the cocoa seedlings would also benefit from free modern trends of managing their cocoa farms through the Municipal Department of Agriculture to enhance and improve the farm’s productivity, he hinted that Cocoa production has over the years created jobs and expanded income generated qualities for all farmers in that enterprise, he argued.

According to the Tarkwa MCE, the cocoa yield is also expected to feed the Cocoa processing factory which is currently under construction under the One District One factory 1D1F policy in the Municipality.

The MCE charged the youth and the indigenes to involve themselves in the various agriculture policies outlined by the government so far to create jobs and some considerable income for their living.

He reiterated Government's commitment to enhance a better economic standard of living for all citizens and this has been through the Planting for Export and Rural Development, PERD initiative, he said.