The Size Of Parliament 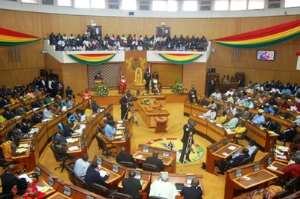 For a body whose main activity is communication, our Parliament has been mis-communicating a bit in the last few weeks. It began with the bizarre assertion of Parliamentary immunity on behalf of Hon. Ayariga that was firmly slapped down by the courts. It begged the question of the quality of the legal advice the Speaker and Parliament received.

Then Kade MP, Kwabena Ohemeng Tinyaase put on display the ridiculous view that an MP on his/her way to Parliament could ignore traffic regulations and endanger the public "free bonto".

Then Parliament announced its plan to build a new chamber, pointedly adding that the plan, estimated to cost 200 million USD, had the support of the President. The Majority leader, Hon. Kyei Mensah-Bonsu said the new chamber was "necessary due to inadequate space in the chamber, near exchange of fitiscuffs and security threats amongst others" He added that the Speaker missed some MPs because of columns. In a brilliant editorial, Joyfm showed there were no columns in the chamber as claimed by the Majority leader!

As the chorus of condemnations rose, the tide turned. After the initiative was wisely abandoned by the Presidency, Parliament caved. The Parliamentary Service Board announced that it had "taken the development of the new chamber block out of its PRESENT agenda". There was no remorse and this scheme will be back. It reminds me of the young woman who walks away from advice that she should dress more modestly by swinging her hips provocatively. This was an important victory for people power.

This whole episode should encourage us to answer some important questions about Parliament.

First, what is the ideal size of our Parliament in terms of number of MPs?

Second, how often do we need to build new chambers for our Parliament?

Third, does the size of our Parliament correlate with its quality?

Fourth, are we getting value-for-money for our Parliament?

India, which is the World's largest democracy with a population of 1.3 billion, has a Lok Sabha (Lower House) of 545 with a Parliament building completed in 1927.

Great Britain has a population of 66 million and 650 MPs, housed in a building rebuilt between 1840 and 1876 after fire gutted an earlier building.

Let me finish with the Americans. They are 327 million with 435 members of the House of Representatives housed in a building rebuilt after the British burnt down the original in 1814. Indeed, the Americans have had the same size of Congress since 1913 when they were only 97 million and yet they have created the American century and won 2 world wars while becoming the world's only superpower!For the avoidance of doubt, I know that all the countries I have cited have upper houses of their legislature but the numbers speak for themselves.

Parliamentary output is not about size. Our current chamber that we seek to replace was built in 1965 and renovated in 2013.

Now, why is India, whose Parliament was built in 1927 giving us a loan to rebuild ours? Do we just love borrowing? There is no free lunch anywhere.

My fellow Ghanaians, the truth is that we need a BETTER Parliament, NOT a BIGGER Parliament.

We need Parliament to work towards PERFORMANCE, not PERKS.

We need Parliament to work for the PEOPLE, not their PARTIES.

We should commend the proactive spirit that moved Parliament to think ahead, to a bigger chamber.

Let them turn that attitude to our annual floods, to our children studying under trees and to those dying at "No bed" hospitals.

To the Speaker who is looking for a legacy, what about helping the President to fufil his laudable pledge of making Accra, the cleanest city in Africa!

As the bible you know better than I suggests, Mr. Speaker, these policies for the benefit of the least of us would please God.

It might even move us to change the name of Accra to Oquayeman!!

God bless Parliament and give them wisdom and the spirit of sacrifice and God bless Ghana.