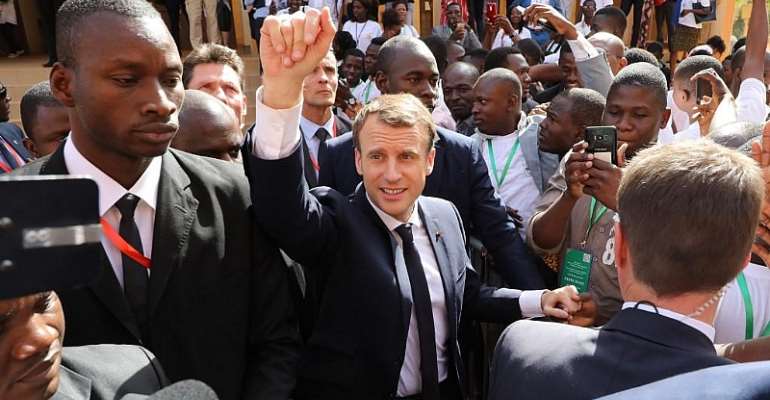 "Let's talk about Africa." That's what's on the menu Thursday when French President Emmanuel Macron addresses members of the African diaspora, accompanied by Ghana's leader Nana Akufo-Addo. Macron is keen to reinforce Franco-African ties – and he's called for a frank discussion without any taboos.

Over 300 people from France's African diaspora are expected at the Elysée palace on Thursday for an interactive discussion with the French president.

Emmanuel Macron has told them they can challenge him on any topic, whether it be France's colonial past or the controversial CFA franc, perceived by many African elites as a tool of domination. No topic is off limits.

The format will be similar to the Grand National Debate launched earlier this year after Yellow Vest protests to reconcile the government with ordinary French men and women.

This time, Macron will be looking to reconcile France and Africa, and his point of contact is the diaspora.

French nationals of African origin or dual citizens are estimated to be around 3 million in France, according to observers (under France's egalitarian ethos, no official data on ethnic origins actually exists).

"The diaspora with their double culture and networks can help France get its foot back in the door in Africa," comments Antoine Glaser, a specialist on African affairs and author of the book Arrogant like a Frenchman in Africa.

"Today, there are around 125,000 French nationals, primarily in Senegal, nothing compared to the three million French nationals of African origin or dual citizens in France, whose voice counts," Glaser told RFI.

Macron is hoping to use the voice of the diaspora to talk to Africa. He may have to tiptoe through a few minefields first, starting with the fallout from France's support of autocratic leaders in Cameroon and Chad.

Breaking with Françafrique
In the case of Ndjamena, Paris intervened militarily to stop Chadian rebels from toppling long-term president Idriss Deby back in March. The move was seen by critics as reminiscent of a by-gone era and proof that the shady networks of "Françafrique" – where French leaders backed controversial African presidents as long as they served French interests – are well and truly intact.

"To break with Françafrique, the government is promoting a vision called Africa-France," explains Glaser.

Macron has chosen an influential ally to help him in the shape of Ghanaian President Nana Akufo-Addo, well respected on the African continent and who comes with less baggage than Cameroon's Paul Biya or Chad's Idriss Deby.

"It's not surprising that he's chosen President Akufo-Addo to address the diaspora in France," reckons Glaser.

"Addo is a pan-Africanist. He won admiration in 2017 when he rebuffed Macron's offer of help, saying Ghana doesn't need handouts," he told RFI.

Moreover, the Ghanaian President has declared that 2019 will be the "Year of Return", where people of African descent make the journey back home. Addo's talk of black empowerment appeals to Macron.

Both believe that the diaspora hold the key to the future development and empowerment of Africa.

Knocking against glass ceiling
It is however a tall ask of France's black population. They continue to hit the glass ceiling when it comes to getting the top jobs in France, and yet they are being asked to be the gateway for France's return to Africa.

"Emmanuel Macron's strategy is two-fold. He is inviting these French nationals of African origin to the Elysée to show the public that they are French just like everyone else. The catch is: he wants them to help him reinvigorate Franco-African ties, in return."

The French president has already begun to do so through tools such as the Presidential Council on Africa (CPA), set up shortly after his election, and made up almost entirely of ethnic minorities.

The message is clear – France wants to move beyond seeing Africa through a prism of immigration alone but as the future, as Macron outlined in his key speech in Burkina Faso in 2017.

Critics like Glaser argue that he may also be keen to ensure his own future.

"France's African diasporas are an untapped voting base for Macron. They may make up only 2-3 percent of voters, but they could be enough to swing the 2022 election in his favour," he said.