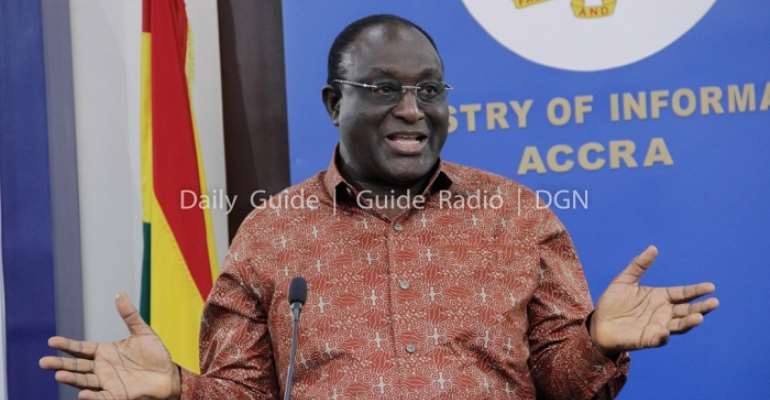 The Minister for Trade and Industry, Alan Kyeremanteng has emphasized that, Ghana stands a great chance to benefit immensely from hosting the African Continental Free Trade Area (AfCFTA).

Addressing press men at the 'Information Ministry's 'Minister's Briefing' series on Wednesday, July 10, 2019, in Accra, the Minister stressed that: “The hosting of the Secretariat will promote Ghana as an attractive investment destination and actively promote foreign direct investments.”

He added that it would also attract major international financial institutions and become the preferred location for citing the corporate headquarters of international companies doing business in Africa; open new market opportunities under preferential terms for Ghanaian producers particularly SMEs, and enhance Ghana's current industrial development agenda and contribute to the diversification of the Ghanaian economy.

Ghana, he said, would have the opportunity of hosting various regional and continental meetings and other events associated with the AfCTA, enjoy many other collateral benefits which would enhance income levels of many Ghanaians and get the opportunity to recruit local professionals and administrative staff to work in the Secretariat.

Mr. Kyeremanteng however cautioned against lackadaisicalness urging that “Ghana can and should leverage the opportunity of hosting the AfCTA Secretariat to become the new commercial capital of Africa, a regional trade hub and economic epic-center and the new gateway to the continent.”

He revealed that prior to Ghana winning the bid to host the Secretariat, government, through many interventions and policies has already placed Ghana in pole position to accrue the many benefits that come with hosting the Secretariat.

Initiatives such as the One District, One Factory (1D1F), One Region, One Park (1R1P), Strategic Anchor Industries Initiative, SME Development and Promotion of Standards are some interventions geared towards enhancing the industrial productive capacity of the economy.

Under trade facilitation, Customs Management Reforms including Single Window Platform, implementation of the WTO trade facilitation agreement are key interventions by government to ensure Ghana is strategically positioned to gain from hosting the Secretariat.

The Port Expansion Project, expansion of roads, airports and railways are also a few of government's efforts at improving upon the trade-related infrastructure of the country.

The AfCFTA is a single market covering the entire continent of Africa. So far fifty-three out of fifty-four countries have signed the agreement with Eritrea the only country yet to sign.

Being one of the first countries to sign the agreement, Ghana played a central role in the actual negotiations of the AfCFTA between 2015 and 2018. Ghana was the first country to offer to host the Secretariat, after the initial signing at the AU summit in March, 2018.

One of the main strategic objectives of AfCFTA will be to increase intra-African trade through better harmonization and coordination of trade within the African continent.

It is estimated that intra-African trade will increase by as much as $35 billion per annum or 52 per cent by 2022.