Advancing science education in Ghana as a means of national development: the role of Vacation Initiative in Science, Africa (VISA) 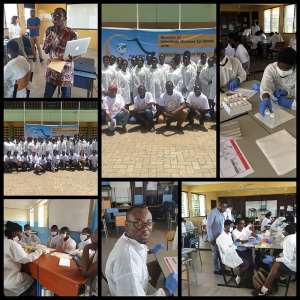 Ghana and Africa are at the crossroads of development. Since the 1970s when the entire continent of Africa got political independence, it appears that the continent has not made marked progress in overcoming the colonial legacies of underdevelopment. More specifically, the continent of Africa continues to suffer from some forms of deprivation politically, economically, and socially. Poverty remains a major challenge on the continent. While many continue to suffer the monumental burden of diseases, others like Sudan and Congo, face raging conflicts. These challenges have taken the steam of the lives of many Africans.

Largely, Africa is a continent with multiple challenges. Given the fact that Africa is challenged on many fronts, a group of young men and women, who have made some significant strides in their academic pursuit, have established a non-governmental organization called Vacation Initiative in Science, Africa (VISA). The NGO seeks to deploy the principles of science through the vector of appropriate technology to push the frontiers of development in Africa. Given that most of the founders of the NGO are budding scientists, who are pursuing science education at the terminal levels at prestigious universities across the world, they seek to bring their knowledge, experience, and expertise to bear in helping the next generation of Ghanaian and African scientists to rub shoulders with their peers in the rest of the world.

The motivation behind the formation of VISA is informed by the logic that given the levels of development in Ghana and Africa and the tempo of the world, as far as science is concerned, it will take scientific ingenuity to liberate the continent of Africa from the doldrums of underdevelopment. The challenge of Africa could be summarised into a triple bane: famine, conflicts, and diseases. The so-called developed world has made important strides in overcoming these triple challenges through the instrumentality of science and technology. Unfortunately, in Ghana and Africa, the level of scientific development is so low that a bleak image is cast on the continent. Consequently, while the founders of the NGO are convinced that we cannot take away geopolitics in any critical analysis of the predicament of Africa, we think that science and technology hold the key to unlocking the development of the continent. But we are also convinced that science alone cannot provide the magic wand to birth the coveted development Africans are looking for. Thus, we have ensured that the founders of the group include social scientists and natural scientists. This blend helps us to look at the developmental trajectory of Africa from a holistic perspective.

In view of this, Sabastine Eugene Arthur (Doctoral researcher, University of Cambridge, UK), Millicent Opoku (Noguchi Memorial Institute for Medical Research, Ghana) and Lois Afua Okyerewaa Damptey (Doctoral researcher, Open University, UK) formed the organization. These are established scientists who are working hard to ensure a generational transmission of scientific knowledge to the younger generation for the purposes of advancing the development of Ghana and Africa. They are supported by two social scientists (Nene Bedu Opata Korley II, the Chief of Nkurakan in the Yilo Krobo Traditional Area (Nene, whose maiden name is Solomon Agbozo Bedu, is also a student studying Chartered Accountancy and MBA with the University of South Wales, UK. He further serves as a Police officer, currently seconded to the Ministry of Foreign Affairs and Regional Integration), and Charles Prempeh, a Doctoral researcher at the University of Cambridge (he also doubles as a lecturer at the Kwabena Nketia Center for Africana Studies, African University College of Communications, Accra).

Having established and registered the VISA in 2018, the group has undertaken science engagement programmes with the motive of helping pupils at the basic and secondary levels of education to appreciate the centrality of science and technology in nation-building. More specifically, the VISA seeks to deconstruct the myth that pursuing science education is a herculean task that cannot be enjoyed by the so-called average pupil/student.

Consequently, considering the pivotal role of Science Technology Engineering and Mathematics in national development, VISA has begun a mission of promoting experimental science education at the basic schools in Ghana. Launching the basic schools as our base, the VISA will extend its mission to secondary schools and tertiary schools in the foreseeable future. In pursuit of this motive, on May 6 - 7, 2019, May 9-10, 2019, and June 14, 2019, VISA organized three experimental science events at Labone SDA Basic School, some selected basic schools at Nkurakan in the Eastern Region of Ghana, and Queens Court School respectively. On June 21, we had a group of eighty pupils from eight schools converge at the Synergies Institute, Accra, for yet another program. These schools were selected to begin a long project of promoting experimental science education nationwide and the African continent. The program brought together a group of young and budding scientists from the public universities in Ghana to walk pupils at the basic schools through the basic rudiments of science education. They included: Ayisha Mahama, Afua Ohenewa Owusu Antwi, Richmond Ayee, Raymond Adjei, Maame Ekua Oforiwaa Ofori, Sylvester Languon, George Yankson, Issabel Ampofo, Michelle Abena Buckman, Solomon Bediako-Frempog, Emmanuel Kofi Quaye, Hilda Darko, Faustus Akankperiwen Azerigyik, and Abou Ruth Anin Marie-Anne Delaneige Overall, more than 350 pupils who were predominantly girls were engaged. There were ten groups of not more than three students per volunteer per group with activities running for morning and afternoon sessions each day. Each session lasted for about 2.5 hours.

Brief lectures with intermittent practical sessions were given to the pupils as they set out to identify an unknown disease spreading from a school to homes, hospitals and to other parts of the nation. The participating schools and towns in Ghana were used as models for the disease outbreak. After the brief introduction of the disease, the students were challenged, to identify the possible cause of the outbreak. This was done by asking the pupils to test simulated blood samples (red food colour dye in water) collected from infected individuals for possible pathogens that might be responsible for the outbreak. The pupils were introduced to the concept of deoxyribonucleic acid (DNA) as a unique identifier of every organism and its importance in accurate diagnostics and enhancing the implementation of appropriate control strategies for diseases. During this session, each group built a DNA sequence using Lego brick as DNA bases that matched the sequence of a pathogen. By now students had confirmed with the DNA test that Measles virus was responsible for the disease outbreak. The importance of putting on appropriate personal protective equipment when working on pathogens and generally in the laboratory was emphasised to the children. The method of engagement used here was adopted from Dr. Lucy Thorne of University College London and was sponsored by Microbiology Society UK, and Hardie Wren Development Initiatives, with support from Professor Ian Goodfellow, Department of Pathology, University of Cambridge.

A pupil from the Roman Catholic Basic School in Nkurakan, after participating in the program said,

“I wish I had always known that science is not difficult. The experiment we did today has helped me to understand that science is not difficult at all. I think that if we were to be doing more experiments, all of us will be scientists. Our teachers have been teaching us theories. But I don’t blame them, because they don’t have the tools that you have brought to us. In fact, from today onwards, I am going to build my interest in science.”

At the end of the six-day program, VISA achieved its motives of deconstructing the myth around the studies of STEM and helping change attitudes about the subject. Some of the teachers, who were at the program, averred that given what VISA had done, they were sure that their pupils will develop their interest in STEM. At Nkurakan, the Circuit Supervisor and some STEM teachers in the District graced the program. Considering that science and technology could help to reverse the challenges that have burdened the development of Ghana and Africa, VISA is convinced that any efforts at developing the discipline will help the continent to match with the ethos of the 21st century world. VISA holds the assumption that a point of convergence needs to be established between African scientists and scientists from the West and East to forge a unity that will solve the common challenges of humanity: nuclear enrichment, destructive science, and climate change. The mission of VISA in practice is to attain two objectives: first, encourage pupils with interest in science to go into the field without the attending scarecrows and second, the political elites to invest in science education.