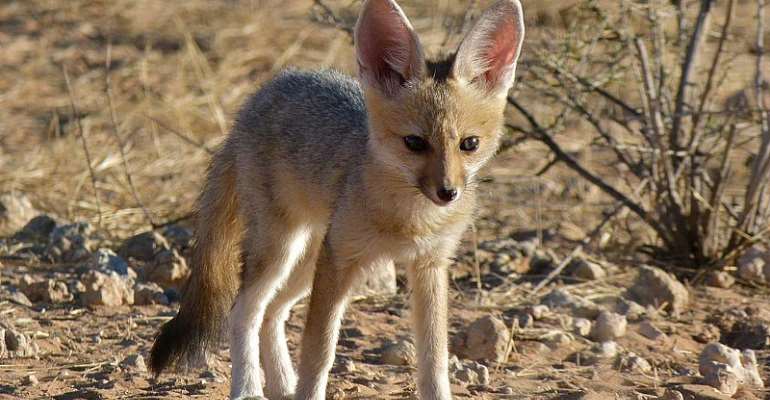 Camera traps have for the first time captured images of the diminutive Cape Fox far further north than it has ever been seen before: in Zimbabwe's western Hwange National Park. Scientists say climate change is likely a key factor in the fox straying well beyond its usual limits.

As Southern Africa dries out, this dainty fox, with a very bushy tail and a distinctive silver back, has been able to expand its range northwards from drier regions in South Africa and Botswana, researchers say. The nocturnal animal, the region's only true fox, has relied on its skills as a clever opportunist to survive.

Andrew Loveridge, a conservation biologist with the Wildlife Conservation Research Unit at Oxford University, says dozens of camera traps laid in Hwange National Park were meant to survey other larger carnivores, like lions and leopards.

For him, the discovery of the Cape fox was “thrilling.”

“This was completely unexpected,” he told RFI. “It was thrilling for the research team to be able to document the presence of the species in Hwange and Zimbabwe for the first time.”

The animals, measuring up to 60 cm and weighing little more than a bag of sugar, are normally associated with deserts or semi-deserts, such as Botswana's Kalahari, the Karoo of South Africa and Namibia's Namib Desert.

Zimbabwe's Hwange National Park gets more annual rainfall than those areas. It has bigger trees, unlike the open grasslands and stunted thorn trees preferred by the fox.

Writing recently about their findings in the African Journal of Ecology, Loveridge and his co-researchers note that the fox (or foxes) picked up by the camera traps in Hwange were either “recent pioneering colonists or vagrant dispersers”.

“This northward extension of the Cape fox distribution may be another example of range expansion by an adaptable and opportunistic canid in the face of changing environmental conditions,” they wrote.

"The occurrence of Cape foxes outside the northern margins of the accepted species range may be the evidence of colonisation of formerly mesic (moderately moist) areas by an arid‐adapted species, as a result of increasing aridification in the region."

At over 14,000 square kilometres, Hwange is Zimbabwe's biggest national park. The fox is tiny; could it have been there the whole time and simply been overlooked?

Loveridge thinks not. He said he and other researchers had been working in Hwange for more than 20 years, and carried out many thousands of days of surveys using camera traps. Yet this was the first documented record of the species. The fox hadn't been reported by earlier researchers, parks staff, safari guides or tourists either.

“My feeling is that the foxes are recent arrivals,” he said.

Isla Grundy, an associate professor in the University of Zimbabwe's department of biological sciences, agreed climate change could be "a possibility" behind the foxes' apparent range expansion.

"This does suggest climate change, but only suggests it for the moment," said Grundy, who was not involved in the Hwange study.

But, she told RFI: "Until there is more evidence nothing is certain."