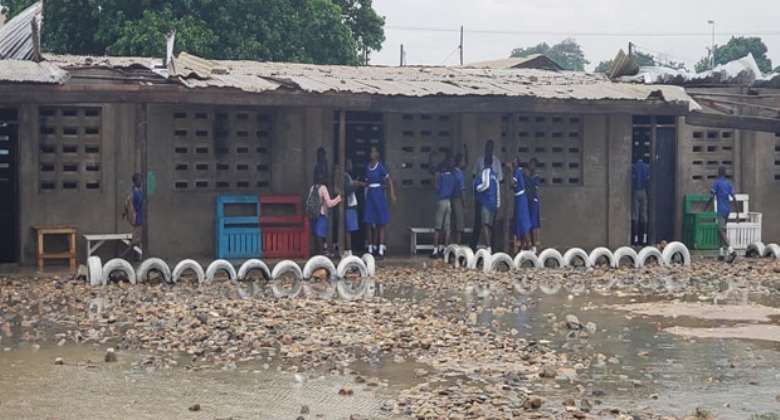 Activities at the Manhean Anglican Schools was last Monday ground to a halt by a fury of rainstorm in the Tema Metropolis of the Greater Accra Region.

The heavy downpour accompanied by strong wind which lasted for close to four hours, blew off a portion of the school roof. Pupils were studying in their various classrooms when the incident occurred.

After the incident, the pupils were moved to join another classroom while their original structure was abandoned, with fear of wind gradually taking over the whole roof.

Besides the roofing that is in a deplorable state, the structure of the school also gives cause to worry as some parts have experienced deep cracks and the roofing appears to be weak thereby putting the lives of the students in jeopardy.

However, authorities from the Tema Metropolitan Assembly (TMA) and National Disaster Management Organisation (NADMO) have visited the scene to assess the situation.

The Metropolitan Chief Executive (MCE) of TMA, Felix Nii Anang-La blamed the condition of the roofing on activities of local footballers in the community.

“It turned out that, but for the activities of local football players in the community, the roofing would not have been that badly damaged. They climb on the roof and scale walls to retrieve their balls,” he stated.

He said his outfit intends to fence the school after putting the school in good shape to put an end to the situation.

FIFA throws out SAFA’s protest case against Ghana after WC q...
49 minutes ago

Appropriate adequate funds for establishment of Ghana’s CDC ...
55 minutes ago