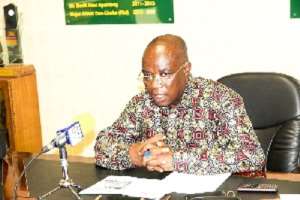 The management of the State broadcaster, Ghana Broadcasting Corporation (GBC) has vehemently refuted claims by some staff of the organization that it has sold its channels – GTV Govern, Obonu TV, GTV Sports Plus and GTV Life – to private entities.

According to the management, there was no way it can sell state-owned properties as being alleged by a section of the staff.

Rather, it explained that it was a partnership agreement that management had entered into with the aim of commercializing GTV Govern, which the Constitution makes provision for in the establishment of the state-owned media.

“What management has to say is that we have not sold any channel. We are in a relationship with KBL, an extension of an already existing relationship … we do not have that authority to sell.

“Every asset that we have here belongs to government so if we are to sell anything, we need to get approval from government so this is not a sale,” Augustus Yamson, Acting Director General, said.

In recent times, some staff members of the state-owned media organization have protested against certain deals being undertaken by the management.

The workers alleged that management sold GTV Govern to KBL Media of the Jospong Group and that there were plans to further sell GTV Sports Plus to Star Times, a Chinese-owned company, while Obonu TV, a channel dedicated to the Ga community, was to be sold to the McDan Group of Companies.

The aggrieved staff even hang a banner on a tree with the inscription: “Reverse GTV Govern Deal Now. If Private people manage GTV channels, what happens to government workers? Principal alleged actors must proceed on leave. Pay retirees their service benefit”.

Explaining the circumstances surrounding the collaboration between management of GBC and KBL, Mr. Yamson said the decision was to make the organization derive the best from its channels.

He said the state media had not deviated from its role of offering public service to the nation but also had a duty to ensure its channels are run efficiently to generate income for the activities of the organization.

“So that was the reason we brought GBC 24 and GTV Govern together because they were doing the same current affairs and news, in order to free one channel to have this collaboration with KBL,” he added.

The Acting Director General said the Memorandum of Understanding (MoU) signed for the commercialization of GTV Govern would serve the interests of the workers.