You Cannot Legislate Conscience: The Reason To Avoid The Regulation Of Churches 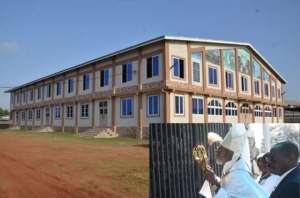 A few months ago a legislator worried about the abuse and exercise of religious freedom in Ghana, called for a law to address the problem. He was really hard on the practitioners that they take advantage of the religious and the ignorant nature of some Ghanaians to dupe them. To him the answer is regulation through legislation.

The bane and mane of man is his rationality. Rationality entails freedom, and choice is implicit in freedom. The right to choose also means reward and punishment. Obviously God allows freedom of choice. The existence of rationality and the freedom of choice admits the inadequacy and fallibility of man.

The Bible tells us that God allows man his free will in order to make him develop his essence or value. The pain and the joy of this journey called life are etched in our soul which will be part and parcel of us forever. Jesus says that the seeds sown must all be allowed to grow until the days of harvest. Paul in his speech at the Areopagos to the Greeks admits the fallibility and the humility of the Greeks to reach out to the Greater God they called the “Unknown God”. Clearly God of creation knows the weakness of his creatures and makes provisions for them. God does not compel, he allows you the free will to learn. If God does not allow free will then he will not be right to punish us.

History is full of examples of rulers trying hard to legislate their will on people. A pope issued the papal bull of 1493 dividing the world between Spain and Portugal! The interference of the pope in the marriage of the English Monarch led to the creation of Anglican Church. The Spanish in their conquest of South America claimed that potato was devils food and they tried to ban it!

Las Casas, a priest and slave owner penitent of his deeds for the massacre of the red Indians tried to atone for his sins and suggested the use of black men as slaves as he claimed they had no souls! These narratives will not end if I want to go on.

Martin Luther in his stand against the sake of indulgences by the Catholic Church, was asked to recant and he calmly said: You can’t command conscience.

What Must Be Done

The Bible is full of people, including priests seeking to take advantage of people in order to carry favour from rulers, some from ignorance from people. There was a time even God made a donkey talk. In our recent history the case of Rasputin who took advantage of the sickness of Alexis the son of the Tsar in order to get political advantage, eventually paid for it with his own dear life.

Nature has time for man, in the long run the day of reckoning will come, when nature’s whip will whip man into realization of his sins.

Goebbels, Hitler’s propaganda chief is said to have said: when lies are repeated frequently they assume the semblance of truth and people believe in them. This is untrue. Semblance of truth and truth are not the same. A lie is a counterfeit, it is a mask. In fact a lie is a confirmation of supremacy of the truth. A lie has no intrinsic causal and inner validity to yield the value of truth in action. If you implement lie the results will be catastrophe. If you sow the deceit you reap the whirlwind. So charlatans if any will not forever have free day people will learn through the pain and the reward of nature will catch up with them.

Light will always drive away darkness. Sin will genuflect in front of righteousness. The eclipse of the sun by the moon is temporal. The sun will always shine.

The sea perhaps hints at the nature of God. The sea is salty. It is an anti-putrefying. The chemistry of the sea doesn’t admit rot. The sea with zest and power throws out the dirt thrown into it by man. The sea is self-cleansing. So also is God. The free will given to man is within bounds, people who abuse this freedom will finally pay. You will counter by saying that, what about the pain entailed in this costly experience. Man has no choice. Our essence and values in the quest called life address that. And that is the lot of man. Nobody can legislate against it. To attempt will make heroes out of charlatans. God like the sea cleanses Himself.

Judas Iscariot was a fake. He followed Jesus, not because of the message of Jesus. He was interested in the purse he was holding. Jesus said it. He was a tragedy waiting to happen. Finally Judas’ mind tried, convicted and executed him. This is the faith awaiting those trying to use God as a façade for their own personal interest.

Voters’ Registration: Everyone Will Be Safe – A/R Minister A...
23 minutes ago