In Era Of Reform, Ethiopia Still Reverts To Old Tactics To Censor Press 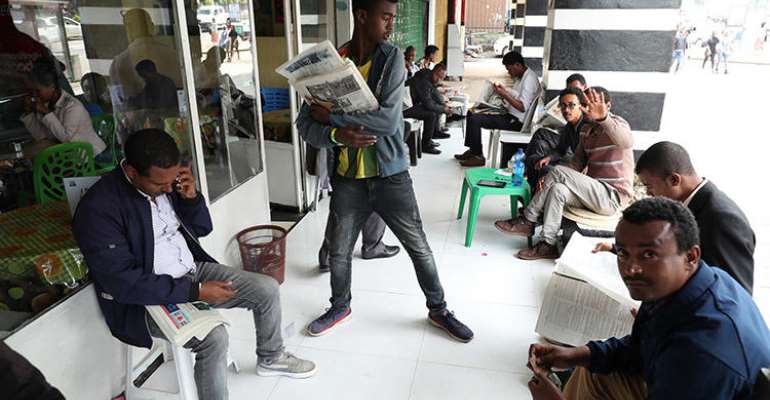 Ethiopians read newspapers in Addis Ababa on June 24. Following what the government refers to as a failed attempted coup, access to the internet was cut and journalists were arrested. (Reuters/Tiksa Negeri)

On June 22, Ethiopia was plunged into an internet blackout following what the government described as a failed attempted coup in the Amhara region. In the aftermath at least two journalists were detained under the country's repressive anti-terror law, part of an uptick in arrests that CPJ has noted in the country since May.

While internet shutdowns and anti-terror laws being turned against journalists are nothing new in Ethiopia, their use in recent weeks is in stark contrast to the Ethiopia that welcomed the international media community for World Press Freedom Day celebrations in May and whose prime minister, Abiy Ahmed, has been fêted as taking bold steps in opening up the space for a free press.

Yared Hailemariam, the executive director of the Swiss-based Association for Human Rights in Ethiopia, described the June 22 shutdown to CPJ as "a very wrong and old strategy of the government." But it wasn't the only blackout last month. The country was hit by intermittent network disruptions affecting internet and SMS services between June 11 and June 18, according to the Open Observatory of Network Interference, a global open sourcing network for tracking blocks. Several outlets, including Bloomberg and CNN, said speculation inside Ethiopia was that authorities cut internet access in those instances to prevent students cheating during examinations.

Alongside the blackouts, in the past two months authorities also arrested several journalists and, on July 8, Ethiopia's Ministry of Defense said in a press conference that it planned to file charges against "individuals and media creating distrust between the public and the army," the state-affiliated Fana Broadcasting reported.

All this leads to the inevitable question: did we celebrate the opening up of Ethiopia too early?

Most journalists and human rights defenders with whom CPJ spoke said there are concrete wins: journalists who had been imprisoned for years were freed in 2018 and the government is carrying out positive legal reform . Haimanot Ashenafi, a senior editor at the weekly Addis Maleda, said journalism in Ethiopia today is different from the profession which for years was characterized by "shock and trauma".

Zelalem Kibret, an Ethiopian academic and former blogger, saidthat he was "ambivalent" as to whether recent events were a case of "an old habit struggling to fade away or a renewed attack on the press."

However, several of the people with whom CPJ spoke said they were concerned about the future for the media.

"It doesn't look as bright as it was a few months ago. My optimism is dimming though I am still hopeful," said Elias Kifle, the chief executive of the online news outlet Mereja TV. He added that the problems reflected polarization in the country.

Belay Manaye , an editor at the privately-owned Satellite Radio and Television (ASRAT) and co-founder of the newspaper, Berera, said, "The way we manage this political crisis will manifest which way we could go in the near future: are we getting back to the dark times or will we manage the crisis and move forward? I hope we can manage."

Key to moving forward, the journalists said, is greater openness with the public and the media.

The government has not provided an official explanation for the internet shutdowns, which journalists say disrupted their work and made it difficult to communicate with sources.

When CPJ asked Billene Seyoum, a spokesperson in the Prime Minister's office, about the disruptions she said only that connectivity had been restored. Cherer Aklilu, executive director of the country's sole service provider, Ethio Telecom, did not respond to CPJ's June 28 call or request for comment sent via text message. Attempts to reach Cherer via phone on July 3 were unsuccessful. Ethio Telecom apologized for the shutdowns on June 18 and July 5 via statements posted to its Twitter account.

Haimanot told CPJ that while she believed a shutdown might have throttled "dangerous" speech online on June 22, it could not be the main solution to tackling misinformation. She said that during earlier blackouts that month, conspiracy theories emerged, some of which she had to debunk: a task made difficult because she could not communicate as easily with sources.

Befekadu Hailu, also from Addis Maleda, told CPJ he was disappointed at the shutdown which, he said, was unjustifiable and meant that "the government monopolized the narrative" about events, with the only information available coming from state media.

CPJ experienced the difficulties of reporting during a network disruption first hand. In the absence of a secure means of communication, and with news trickling out of Ethiopia through the diaspora community, misinformation sprouted , including at least one report of a journalist being abducted--a story later debunked by the Amharic service of the German public broadcaster Deutsche Welle.

Anti-terror law back in use
Over 200 people were arrested in the aftermath of the alleged attempted coup, Deutche Welle reported. Of those, at least two--ASRAT manager Berihun Adane and Getachew Ambachew, a volunteer at the station--were detained under Ethiopia's anti-terror law.

The law was used to crack down on dissenting journalists under previous administrations. The Abiy government has prioritized its reform and Cabinet approved a draft law in May and referred it to parliament, according to media reports.

"I'm very concerned about its resuscitation in this delicate time for murky allegations against journalists," said Zelalem, who was previously convicted under it.

On June 26, a court ordered Getachew, Berihun, who also works for Berera, and four others to be detained for 28 days, pending investigations on allegations of terrorism in connection to the unrest, according to Berihun's lawyer Henok Aklilu, and the Addis Standard. Neither the police nor the court specified evidence of the alleged terrorist activity and the journalists have not been charged, Henok and ASRAT editor Betre Getahun told CPJ.

Some of those detained alongside the journalists are members of the Balderas Council, a political movement founded by prominent Ethiopian journalist Eskinder Nega that claims to advocate for the rights of Addis Ababa residents, and is considered by some as controversial.

Eskinder, Henok, and ASRAT editor Betre Getahun said that the pair were not part of the council and that they thought the journalists' arrests could be linked to the strident editorial line of Berera and ASRAT media. Both outlets are both pro-Amhara, which is one of Ethiopia's largest ethnic groups.

Separately, a third journalist, ESAT television station reporter Amanuel Mengistu, told CPJ he was arrested from his home in Addis Ababa on June 24 and released unconditionally on June 26. He said that security searched his home, saying they were looking for weapons, but did not interrogate him or tell him why he was arrested or whether it was connected with his work at ESAT. Before he became a journalist, Amanuel was a member of the Ginbot 7, a group that was previously banned by Ethiopian authorities.

Government spokesperson Billene told CPJ that she did not have specific details about the arrested journalists, but that authorities were investigating people "from various walks of life, professions and parts of the country" in connection to the events of June 22.

Even before the current crisis, authorities were harassing journalists with brief detentions.

Police on May 22 detained Mesganaw Getachew, a reporter with the Ethiopis newspaper, while he was reporting on the demolition of homes in the Arat Kilo neighborhood of Addis Ababa, his editor Eskinder, told CPJ. Mesganaw was released without charge on bail, Eskinder said, adding that police beat and slapped the reporter.

Two days later, Tamirat Abera, a journalist with the privately owned Ahadu FM, was arrested from the station's office in Addis Ababa by police from the Oromia region, the journalist told CPJ. And Gettye Yalew, an online reporter, told CPJ that he was arrested on May 26 when he went to visit Tamirat in jail.

Both journalists were freed on May 27. Gettye's release was unconditional, but Tamirat and three of his Ahadu FM journalists face prosecution in connection to their reporting on alleged misconduct in the courts, according to Tamirat, Gettye, and a Facebook post by Ahadu FM .

CPJ is investigating other reports of journalists being arrested and harassed in Addis Ababa and other regions of Ethiopia, including Ethiopis contributor and activist Elias Gebru

Government spokesperson Billene did not comment on specific arrests, but told CPJ that it was "not always directly related to their journalistic activities." She said the government was committed to opening up the space for the media "at the highest level". Oromia regional government spokesperson Admasu Damtew did not respond to CPJ's text messages in June and early July, requesting comment on Tamirat's and Gettye's case. When CPJ called on July 9, Admasu said he could speak in one hour but did not answer CPJ's follow up call or text message.

The crossroads Ethiopia now finds itself at was reflected in an editorial published in the local publication The Reporter after Tamirat was detained. The editorial said the arrest "sent chills throughout the media industry" and that the government must ensure due process of the law and guard against a return to the past, when Ethiopia was "one giant prison for journalists."