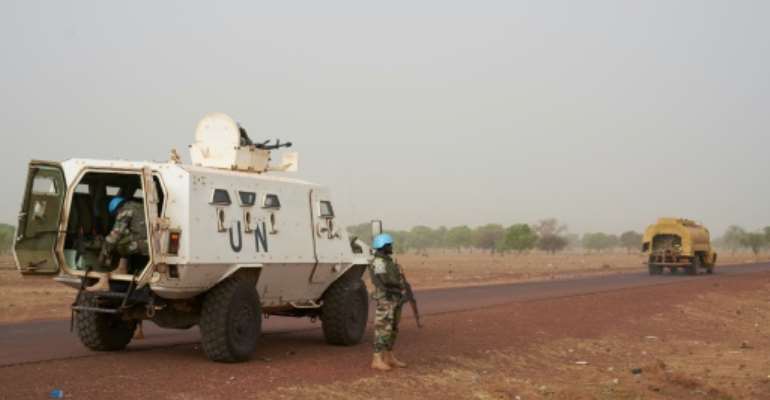 The UN has a peacekeeping force of about 14,700 troops and police in Mali, known as MINUSMA. By MICHELE CATTANI (AFP/File)

The UN Security Council on Tuesday added five Mali nationals to the sanctions blacklist including a businessman accused of drug trafficking and a local official who allegedly profited from aid projects, diplomats said.

The five men were hit with a global travel ban for obstructing peace efforts in Mali, the West African country at the center of an insurgency that is threatening the entire Sahel region.

This was only the second time that targeted sanctions have been imposed in Mali. In December, three individuals linked to armed groups were also blacklisted.

The sanctions are aimed at shoring up a 2015 peace deal to restore stability to Mali following a brief Islamist takeover in the north, three years earlier.

Among the five are two leading jihadists in northern Mali: Houka Houka Ag AlHousseni, an influential Islamist in Timbuktu; and Mahri Sidi Amar Ben Daha, described as a high-ranking officer in the Islamic police that ran Gao in 2012-2013.

Also targeted was Mohamed Ould Mataly, a member of parliament from President Ibrahim Boubacar Keita's political party who has allegedly instigated demonstrations against the Mali peace accord.

The head of a humanitarian aid commission in Kidal, Ahmed Ag Albachar, was added to the list for exploiting a near-monopoly on permits to aid workers in exchange for money.

France put forward the five names on June 28, but a final decision was delayed after the United States asked for more time to address bureaucratic issues.

France requested that the five individuals be hit by an assets freeze, but the United States objected. That request is expected to return to the sanctions committee, diplomats said.

The 2015 peace deal has failed to stop violence by Islamist militants, who have also staged attacks in Burkina Faso, Niger and against UN peacekeepers.