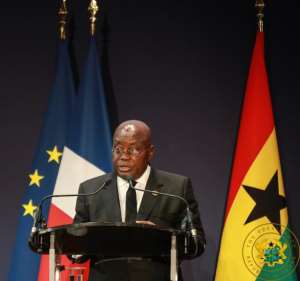 President Akufo-Addo says, “The fiscal deficit, which stood at 9.3% in 2016, has been brought down to 3.9% at the end of 2018. Our actions have resulted in the rapid growth of Ghana’s economy, which, according to the International Monetary Fund (IMF), this year, will be the fastest growing economy in the world at a projected 8.8% (up from 3.6% in 2016).”

Speaking at the France-Ghana Business Forum on Tuesday, July 9, the President stated that the continuing stability of the macro-economy and the cedi; reduction in inflation from 15.4% in December 2016 to 9.5% in April 2019; reduction of lending rates, amongst others; are examples of some of the steps that have been taken to grow the Ghanaian economy.

“In addition to these, a number of taxes, which were militating against businesses and business owners, have either been abolished or reduced,” he added.

President Akufo-Addo told the gathering that all these have been done because there is a government in place in Ghana that believes in the primacy of the private sector, and is working to enhance the prospects of a win-win environment for both private sector and country; an environment where companies cannot just survive, but actually thrive.

“Mine is a government that believes in market principles, and welcomes investors who want to work to promote the same and help build our economy. And, above all, the interests and welfare of our people are our paramount concerns,” the President noted.

We've Not Backtracked; We Still Opposes Intransigent, Headst...
30 minutes ago