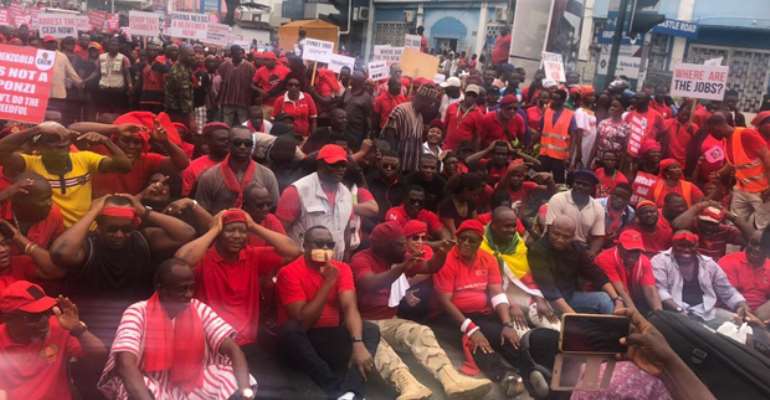 Some high ranking personalities of the opposition National Democratic Congress (NDC) did the unexpected when they sat on the floor during the 'Kum Yen Preko' mega demonstration earlier this morning.

About a junction away from their headquarters in Adabraka, Accra, party Secretary, Johnson Asiedu Nketia and Chairman, Samuel Ofosu Ampofo, led their sympathizers to sit on the streets with their hands on their heads mimicking persons in anguish.

Other notable personalities in the party, like Samuel Okudzeto Ablakwa, Sam George, ABA Fuseini, Leeford Quarshie and a host of others were also spotted sitting on the bare floor, making similar gestures.

Samuel Ofosu Ampofo had a plaster on his lips with his index finger placed on them.

Joining in the demonstration was Bernard Mornah, Chairman of the People's National Convention (PNC) who also sat on the floor.

The demonstration dubbed: “Kum Yen Preko” to wit, ‘Kill me once and for all’ is organized by the Coalition for Social Justice (CSJ) with support from Central Democrats and Aggrieved Customers of Menzgold.