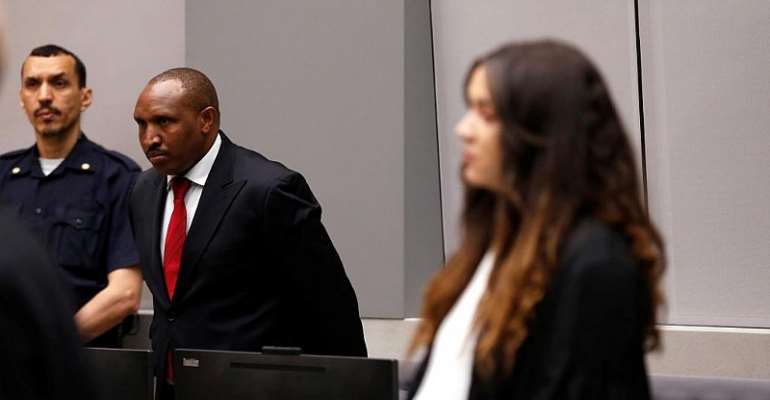 A Congolese rebel chief, known as “the Terminator,” was found guilty of war crimes and crimes against humanity on Monday, in a badly needed victory for judges at the International Criminal Court. Bosco Ntaganda was charged for his role in the Democratic Republic of Congo's Ituri conflict in 2002 and 2003, including massacring civilians and sexually enslaving underage girls.

Wearing a dark blue suit, Ntaganda showed no emotion Monday as head judge Robert Fremr read out the 18 counts of war crimes and crimes against humanity against him.

Prosecutors said the 46-year-old was a "key leader" who recruited child soldiers and gave direct orders to target and kill" non-combatants in the Democratic Republic of Congo's eastern Ituri province in 2002 and 2003.

"It's a bad day for Bosco, a great day for justice, a great day for the victims of Ituri," said Anneke Van Woudenberg, the Executive Director of corporate watchdog Raid in the UK, after the verdict.

"As Bosco Ntaganda stood up to hear the judgment on each one of those counts, the constant word of 'guilty, guilty, guilty' that ran out across the court room on Monday morning is important for others committing these kinds of atrocities," she told RFI. Her message is clear: justice will catch up with you.

It has taken a while. Ntaganda was first indicted in 2006 by the International Criminal Court for allegedly recruiting child soldiers in Ituri, but then fell off the radar.

At one point, he even served as a general in Congo's army before turning himself in 2013 as his power base crumbled. But for nearly ten years, he was a symbol of impunity in Africa.

"To wait so long and to finally hear a verdict handed down of guilty is really important. It's timely, and I hope it will have a big impact for the victims in Ituri,” commented Lorraine Smith van Lin, a post-conflict justice adviser with human rights group Redress based in the Hague.

Ntaganda case stolen from Africa The long-awaited verdict is also the first conviction the Hague-based court has secured for gender-based and sexual violence since its creation in 2002.

"The ICC speaks about its role in relation to sex crimes but we're not seeing a lot of evidence of actual convictions that stand, so this decision today is quite important," van Lin told RFI.

It is also important for the international body's reputation following a string of setbacks. The ICC has been criticized for letting some of its most high profile suspects walk free, including Ivorian former leader Laurent Gbagbo and another ex-Congolese warlord: Jean-Pierre Bemba.

"Those were very embarrassing acquittals for the ICC prosecutors, so the successful prosecution of Bosco Ntaganda, one of the highest profile suspects to have come to the dock in The Hague is extremely welcome," reckons for his part Phil Clark, author of the book Distant Justice, analysing the impact of the International Criminal Court on African Politics.

However, he has qualms that the international justice system may be interfering with Africa's local courts.

"While many victims will welcome today's verdict, many have asked why Ntaganda wasn't prosecuted at home where they could have witnessed this case first hand, rather than having to watch the case beamed from a television screen from The Hague," he told RFI.

Wrong debate Ntaganda, Clark argues, was already being investigated by domestic prosecutors in Bunia, the main town in Ituri. "The ICC basically stole the Ntaganda case from the domestic courts in Ituri (...)" and ultimately this "remarkable prosecutorial success, which would have been more valuable within Congo, now goes to the International Criminal Court," he added.

For Redress' van Lin, such debate is much ado about nothing.

"I think the real issue is whether or not the verdict is in favour of victims, I don't think it matters where it happens," she commented.

A total of 2,123 victims participated in the trial, including former child soldiers and victims of Ntaganda's rebel group.

"I think at the end of the day the issue is whether or not justice has been served for the victims," reckons van Lin.

More than 60,000 people have been killed since violence erupted in Ituri region in 1999, according to rights groups.

Prosecutors said Rwandan-born Ntaganda was central to the planning and operations for the Union of Congolese Patriots rebels and its military wing, the Patriotic Forces for the Liberation of Congo (FPLC). The FPLC killed at least 800 people as it fought rival militias in Ituri.

Cold-blooded For Van Woundenburg, a former Human Rights Watch senior researcher, who has been documenting Ntaganda's crimes since 2003, and has met and interviewed him on several occasions, he stood out as a "particularly brutal individual."

"Often you get these warlords who direct, who command from their headquarters, who aren't necessarily themselves on the frontline, murdering, killing and raping. But Bosco was, which is in part why he was given the nickname "The Terminator," which I think is apt," she said.

Ntaganda is one of five Congolese warlords brought before the ICC. The FPLC's leader, Thomas Lubanga, was convicted by the ICC in 2012 of using child soldiers. He is serving a 14-year prison sentence. The court has also convicted one wartime opponent, Germain Katanga.

Other rebel leaders however, such as Mudacamara remain at large. And despite, the success of Monday's conviction, critics such as Phil Clark are disappointed that the ICC only focused on Ntaganda's early crimes and not the "more systematic and much graver crimes he committed when he became a fully fledged leader."

"It is limited in scope in terms of the time and it doesn't take into account the atrocities that are still happening," admits van Lin.

But for her, "it doesn't blight the conviction today, which demonstrates that the court is serious about going after these commanders and that the long arm of the law will still find them even years after," she said.