With DR Congo's army into forest stronghold of killers

By John Wessels in Djugu and Samir Tounsi in Kinshasa 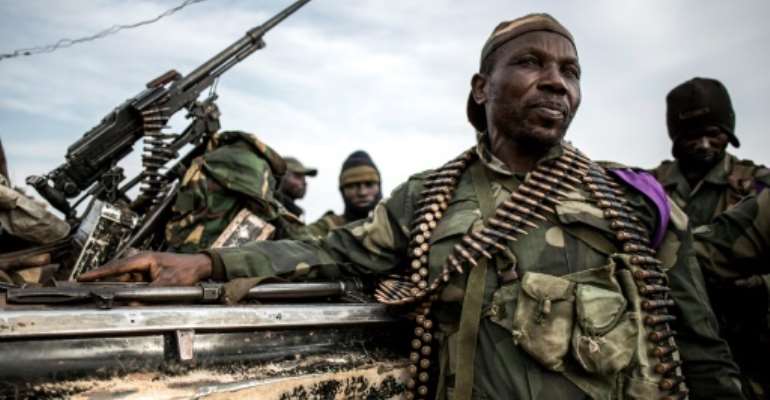 Government troops at a base in Djugu, eastern DR Congo -- the springboard for a weeks-long operation against militia in Wago Forest. By John WESSELS (AFP)

Ituri Storm: The name of an operation that DR Congo's armed forces have launched in a northeastern eastern province against a militia blamed for killing scores of civilians and forcing thousands from their homes. 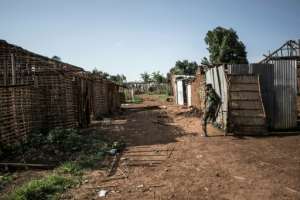 A soldier moves through a village burned by Ngoudjolo's militia near Djugu in the northeast of the troubled country. By John WESSELS (AFP/File)

An AFP photographer embedded with troops in Djugu district found that some 70 percent of villages that he passed through on a stretch of road several dozen kilometres (miles) long had been abandoned and many houses had been torched. 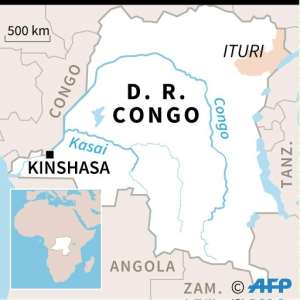 Map locating Ituri province in DR Congo, where officials say at least 160 people have been killed in a month of violence. By Vincent LEFAI (AFP)

Ituri Storm -- "Zaruba ya Ituri" -- aims to carry the fight into the forest stronghold of a military-religious sect named the Cooperative for the Development of the Congo, or Codeco, recruited among the Lendu, an ethnic farming community.

According to official figures that are impossible to verify, the armed group has killed more than 160 people in Ituri province in June alone and forced about 300,000 civilians to flee. 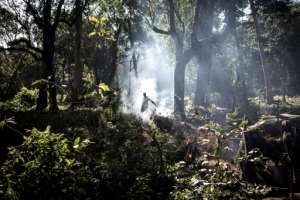 President Felix Tshisekedi has condemned the killings as "attempted genocide" and "a plot".

But he insists the violence is not a resurgence of the intra-community conflict between the Lendu and Hema pastoralists, whose quarrels flared bloodily in Ituri in 1999-2003.

"The first step was to annihilate them or in any case to lessen their harmful effects. That has been done," said Tshisekedi, who gave a press conference in Bunia, Ituri province, on July 2.

"The defence forces will be kept here until they are wiped out." 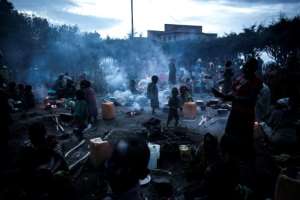 Thousands of people who have fled militia raids have taken refuge in the grounds of a Catholic church in Drodro. By John WESSELS (AFP/File)

Thousands of displaced people, estimated at anything between 7,000 and 15,000, have taken shelter around a church in Drodro.

Many more families have fled, sometimes to Bunia, dozens of kilometres (miles) away, where some told tales of great suffering.

"I was in a house with three children and my wife. The enemies came in the night. We were sleeping. When I took two children, the other one stayed in the house. The enemies killed that child," Charite, a teacher, told AFP. 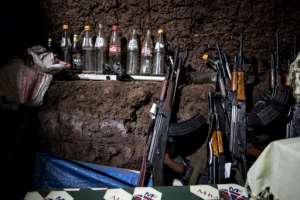 Inside the government base in Djugu. By John WESSELS (AFP)

From Drodro, the military operation pushed on into the heart of the Wago forest, officially presented as the base camp of the "assassins, murderers and criminals".

High ground gives breathtaking views of Lake Albert, a broad stretch of water some 60 kilometres (37 miles) long that marks part of the border between the Democratic Republic of Congo and Uganda.

Closer to hand, scattered cartridges and mortar shells showed that the militia were heavily armed.

Soldiers were silent about the number of militia fighters killed or captured, but they were worried that the enemy had moved along the shore of Lake Albert to prepare new raids. 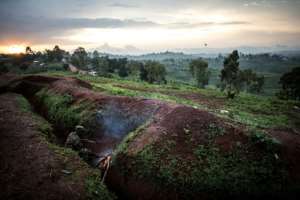 Morning chill: A soldier warms himself by the fire at a base in Djugu. By John WESSELS (AFP)

After the visit to the combat zone, AFP returned to Bunia and its two camps housing several thousand displaced people. Vaccination campaigns against Ebola and measles were set to start on Tuesday.

A humanitarian response, meanwhile, is building up. The UN World Food Programme (WFP) plans to triple its aid to displaced people in the province.