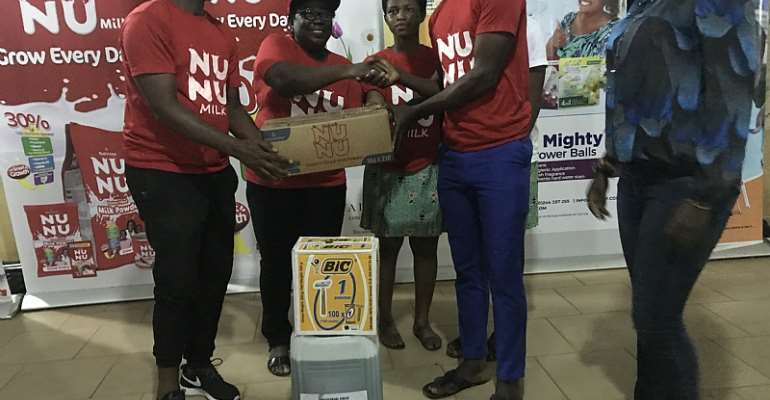 The schools’ sanitation inspection tour is an annual program organized by One On One Foundation, an NGO located in Accra that is helping less privileged in society and also educates citizens to keep Ghana clean.

The schools’ sanitation inspection tour was initiated in 2014 with the noble objective of inculcating in the youth, particularly those in the senior high schools, good health habit.

Mr. Emmanuel Williams, the CEO of One On One Foundation who also doubles as the Coordinator for the Ghana Olympic Committee, speaking at the launch of the 3day extensive sanitation program at Nkwatia Presby, SHS On 27th June 2019, indicated that Practicing good sanitation habit is a shared responsibility. He made emphasis on inculcating the habit of practicing good sanitation practices which have to start from school children and It is the reason their organization initiated this program that is aimed at making Ghana the cleanest country in the world.

Series of activities were scheduled which include, clean up exercise by students of Nkwatia Presby SHS at some selected locations ( Police Station, Nkwatia Health Center and the Nkwatia Market Area) within the Nkwatia Community.

General Inspection was also carried out with lots of fun by the various houses in the school. There was also a marshed kenkey festival that saw students enjoying themselves with mashed kenkey by the School with NUNU Milk.

There was “ Jamma and Bragging Competition “ On 28th June 2019 as well by the various houses. In one of the bragging moments, one student indicated that they have an aeroplane that takes them to class each and every day; that caused some laughter among the students as well as the teachers present.

On Saturday, 29th June 2019, morning, there was an aerobics section that saw students, teachers and the team from One On One Foundation exercising their body with lots of fun.

Some items were shared and they include Nunu Milk, BIC shaving sticks, Cool breeze air freshers, Dr. Mighty Wc balls and Carmel Antiseptic for scrubbing purposes by the various houses and the school administration in particular.

At the climax of the school sanitation inspection tour, there were lots of performances from students. There was a snack cooking competition by the various houses which saw students preparing different kinds of snacks.

The headmistress of the school, Mrs. Cynthia Anim, was happy the schools’ Sanitation Inspection tour came to Nkwatia Presby SHS. She lauded the initiative as a good one and thanked One On One Foundation and their sponsors ( Nunu Milk, Carmel Antiseptic, Cool Breeze Air Fresher, BIC Shaving stock and Dr. Mighty WC balls) . She said “ Cleanliness is next to Godwilliness. Through this initiative, the school compound has since some changes which she hopes that it is going to clean as always so that, students would not get sick from diseases. Mrs. Cynthia Anim, therefore, appealed to organizations, Government, Philanthropists, Individuals, and NGOs to come to there and donate dustbins to the school as this will go a long way to help make the school environment clean.