Okudzeto-Ablakwa, Stan Dogbe Is Not Part of the Akufo-Addo Presidency, by the Way 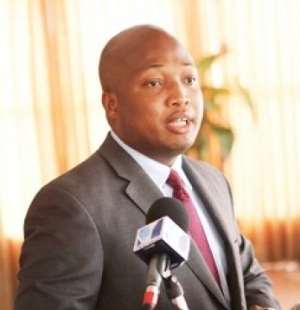 I did not expect Mr. Samuel Okudzeto-Ablakwa to be able to provide any statistical evidence to back up his rather farcical claim that under the politically and incomparably neoliberal tenure of President Addo Dankwa Akufo-Addo, the rate of violence and hostility against Ghanaian journalists by operatives of our national security agencies has significantly increased more than it had been under the tenure of the previous Mahama regime, of which Mr. Ablakwa was one of the deputy principals. And true to both character and form, the National Democratic Congress’ Member of Parliament for the North-Tongu Constituency did not disappoint (See “Assault on Journalists Rising Under Akufo-Addo Gov’t – Ablakwa Worries” MyJoyOnline.com / Modernghana.com 7/7/19).

Indeed, were he an honest politician, Mr. Ablakwa, the Deputy Education Minister during whose watch Ghanaian basic public education fell to the bottom-most rungs of global rankings, according to the Paris-based Organization of Economic Cooperation and Development (OECD), would also have frankly pointed out that under the Presidency of Mr. John Dramani Mahama, it was notorious presidential staffers like Mr. Stanislav X. Dogbe, the so-called crackerjack communications operative, who were widely alleged to have been paid handsome salaries to make punching bags out of hard-hitting Ghanaian journalists like the young broadcast reporter with the radio service or division of the Ghana Broadcasting Corporation (GBC), who was widely reported to have been mauled senseless at the 37th Military Hospital, by Mr. Dogbe, in the presence of Dr. Edward Kofi Omane-Boamah, then the Mahama-appointed Communications Minister, without any remarkable compensatory award from then President Mahama.

Instead, Ghanaians would later learn that Mr. Dogbe had actually been promoted by his boss, you guessed right, President Mahama for “delectably” pulping up the young GBC broadcast reporter. About the only compensation shamefully afforded the victim by the President’s then Chief-of-Staff, Mr. Julius Debrah, was doled out to Mr. Affail Monney, Director of Radio at the GBC and the President of the Ghana Journalists Association (GJA), for the purchasing of a replacement of the state-owned digitized audio recorder that was allegedly completely destroyed by Mr. Dogbe, in the process of the latter’s savage mauling of the young broadcast reporter. The general Ghanaian public would also be later told by Mr. Alban SK Bagbin, the longest-reigning National Democratic Congress’ Member of Parliament, that throughout the entire four-and-half-year tenure of President Mahama, it was actually Mr. Dogbe who was the de facto President of the Democratic Republic of Ghana.

As well, were Mr. Ablakwa even half as honest as he would have Ghanaians believe, the NDC’s spokesman on Foreign Affairs would also have remorsefully admitted the incontrovertible fact that it was the criminal negligence of the operatives of the Mahama Presidency that directly culminated in the ghastly road accident that cost the precious life of Mr. Samuel Nuamah, the Ghanaian Times’ reporter then attached to the Mahama Presidency. To hear this scandalous story to by reliable eyewitnesses, the original vehicle in which the presidential press corps had traveled in a convoy with then President Mahama to Ho, for an Evangelical Presbyterian Church-hosted event, had been disdainfully commandeered by a Mahama operative to be put to “better use” on the return trip. In its place had been cheaply rented a minivan that would not have passed a roadworthy test in any country in the world where motor-vehicle laws were respected.

Indeed, we are reliably informed, it was in his professionally savvy process of enquiring about precisely what had caused the death of 37-year-old Mr. Nuamah that resulted in the brutal beating of the young GBC’s news reporter by De-facto President Dogbe. I have absolutely no doubt that the recent arrests of the two Modern Ghana online media portal operatives, namely, Messrs. Emmanuel Ajarfor Abugri and Emmanual Yeboah Britwum, was politically motivated. But, bet on it, this case may be far more complex and cross-partisan than it has been made out to be or seem, more so in view of the conflicting testimonies provided by the detainees, regarding the fact of whether Messrs. Abugri and Britwum had been “seriously tortured,” as one pro-Mahama self-styled investigative reporter put it, or not.

For his part, Mr. Abugri, who is Deputy-Editor at Modern Ghana, claims to have been severely tortured during interrogation by operatives of the National Security Agency, whereas Mr. Britwum claims to have been treated with the utmost level of professionalism. One of several things could be happening here, and under the far more liberal tenure of President Addo Dankwa Akufo-Addo. For starters, Nana Akufo-Addo’s very noble decision to strictly and impartially enforce media-operation laws in the country, especially vis-à-vis the regular payment of broadcast licensing fees, has not sat well with supporters and sympathizers of the National Democratic Congress, who are widely known to both own and operate most of the defaulting media establishments, both radio and television, across the country.

Then also, it could be that Nana Akufo-Addo’s longstanding reputation as architect of the Repeal of the (odious and extortionate) Criminal Libel Law, which had hitherto seen regimes of the Rawlings-founded National Democratic Congress indiscriminately putting tens of Ghanaian journalists behind bars, largely for criticizing Mr. Rawlings and his wife, Nana Konadu Agyeman-Rawlings, and the satanic couple’s minions and associates, as well as unpopular government policies, has, undoubtedly, emboldened journalists who under the previous NDC regimes had scarcely squealed or even whispered their acute discontent with the ways in which the people’s business was being carried on or administered, let alone cavalierly presume to indiscriminately and recklessly call out, malign and character-assassinate operatives of the Akufo-Addo Administration in ways literally verging on anomie and chaos. It is the salutary attempt by the present government to bring some modicum of discipline and responsibility into the ways in which good and progressive media practice is done that seems to be causing the sort of unease being widely discussed in the country presently.

You see, under the watch of President Akufo-Addo, the Ghanaian media has been far less restrained, to the point of virtual decadence and lawlessness, than it has ever been for most of the last 40 years that the Rawlings-chaperoned P/NDC governments dominated the country’s political and cultural landscape.