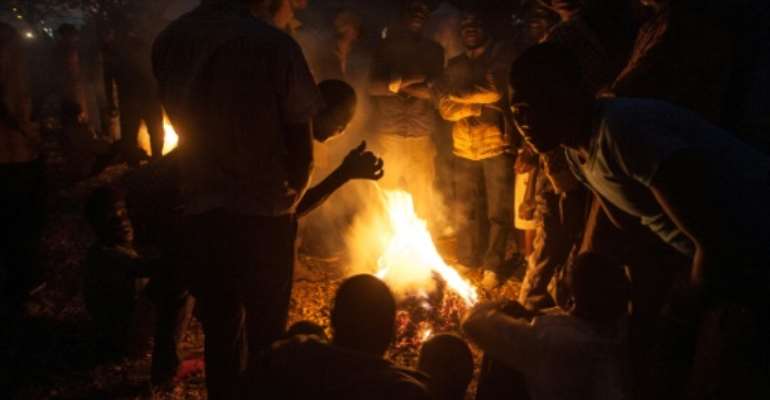 Protesters stand around a fire at a vigil against the result of the May 21 presidential vote in Lilongwe on July 4, 2019. Malawi's re-elected President Peter Mutharika has condemned the protests. By AMOS GUMULIRA (AFP)

Malawi's re-elected President Peter Mutharika on Saturday condemned protests that have gripped the country over the disputed result of a May vote saying organisers wanted to turn the country into a "lawless society".

The aid-dependant southern African nation has seen nearly two months of protests by demonstrators who dismiss the election as fraudulent and demand the resignation of election commission chairwoman Jane Ansah.

On some days the protests have seen businesses in the capital Lilongwe and commercial hub of Blantyre, pull down their shutters for fear of violence.

The president accused the protests organisers of plotting to oust his government and warned that the organisers will be dealt with severely.

"The violence you see is calculated to turn Malawi into a lawless state," Mutharika told a rally to mark the country's 55th anniversary of independence from Britain.

"Turning Malawi into a lawless society is unacceptable. We will hold each one of them accountable, force will be met by force and this nonsense will come to an end," said the president without naming any political party or group.

About 20,000, mainly supporters of Mutharika's ruling Democratic Progressive Party (DPP), thronged Kamuzu Stadium in Blantyre for the anniversary celebrations, a day after scores of protestors converged at the same venue for a vigil against his re-election.

Lazarus Chakwera, leader of the largest opposition Malawi Congress Party (MCP), who alleges he was robbed of victory, and former vice president Saulos Chilima of the United Transformation Movement (UTM) party -- have been taking part in the protests.

The nationwide protests have been organised by a non-profit grouping, the Human Rights Defenders Coalition.

Its vice chairman Gift Trapence, told AFP that the president's statement is "misplaced because these protests are not targeted to overthrow the government".

"These peaceful demonstrations are being done to force Jane Ansah to resign," said Trapence.

Opposition leaders claim correction fluid was used on some results sheets and have lodged cases in court.