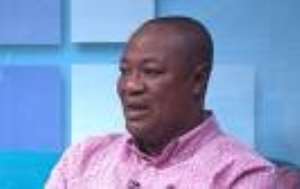 The ruling New Patriotic Party Asante Regional Secretary, Sam Pyne has urged the Security Agencies to deal with any person who will take the laws into his or her own hand to destroy properties during the Coalition of Social Justice's (CSJ) "Kum yen Preko" demonstration.

The "Kum yen Preko" demonstration is slated for July 9, 2019 which starts at Obra Sports in Accra early in the morning.

Coalition of Social is made of the major opposition political parties in Ghana including NDC, PNC, PPP among others.

Speaking to the media ahead of the march, an Executive Member of the Coalition of Social Justice who is also a National Communications Officer of NDC, Sammy Gyamfi noted that the date for the march was July 2 but was changed to July 9 due to the engagement they had with the police.

Sammy Gyamfi explained the rationale behind the march and said the march is against ‘Hardship and Oppression’ in Ghana under the Akufo-Addo-led administration adding that is a replication of the President’s own demonstration he led in 1995 in Ghana.

“Nana Addo instituted ‘Kum yen Preko’ and we are going to protest the same way under the same oppression and hardships under which he led protesters in 1995 when former President Rawlings wanted to implement the Value Added Tax in Ghana,” he said this to newsmen.

He added that the demonstration was also inspired by the “unfulfilled” promises of President Akufo-Addo which led to his victory.

“We had so much hope in the Akufo-Addo administration to transform Ghana after they made all those campaign promises in 2016 but it seems all these promises have become 419,” he added.

However, the Ghana Police Service in a statement issued and sighted by the New Statesman newspaper has cautioned the Organisers of this demonstration not to take the laws of this country into their own hands to destroy properties.

Speaking on Kumasi-television based Kessben TV evening political show "The Punch" on Thursday, July 4, 2019 monitored by Daniel Kaku, the NPP's Asante Regional Secretary, Sam Pyne vehemently opined that should anybody tries to be violent on that day, the police must dealt with the person.

He recounted how the police dealt with Let My Votes Count Alliance when the NDC was in power when they embarked on similar demonstration.

He revealed that the Organisers of this demonstration have planned to use this march to make the Akufo-Addo-led government unpopular adding that if they have planned to do that then Security agencies should deal with them accordingly.

He concluded that "We don't need any argument on this because we have laws in this country and if you try any bad things that go contrary we have to arrest you and let you to face the law, simple".