"Structure": Avignon Festival opens with a grim tale for Europe 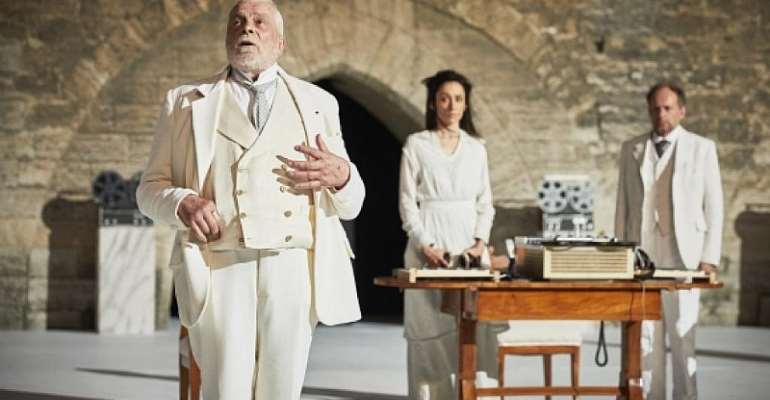 French director Pascal Rambert's new play Structure, performed in the open-air courtyard in Avignon's Palais des Papes, was greeted with muted appreciation. It tells the tragic story of an Austrian family 100 years ago.

Rambert's turbulent family of nine artists is incarnated by some leading French actors. Portly Jaques Weber plays the patriarch, a renowned architect. This domineering, cruel and loving father has made a stuttering nervous wreck of his hyper-intelligent son, played by Denis Podalydès. He is married to the off-kilter Audrey (Audrey Bonnet). Their occupation is manufacturing music out of recorded, seemingly meaningless sounds.

A wake-up call to Europeans
Weber has traumatised his other, this time eloquent, son Stan (Stanislas Nordey), into secrecy and resentment. Stan's sisters, Emmanuelle (Emmanuelle Béart) and Anne (Anne Brochet) are married to unsuitable men. One is an army officer who used to be a musician (Arthur Nauzyciel) the other is a jingoistic journalist (Laurent Poitrenaux). Both of them browbeat their frustrated wives.

The family tears itself and the individual members apart in a metaphor of European disunion.

Russian playwright Chekov seems to to hover over the Pope's Palace between the brightness of the old stone and the dark night sky.

Sitting uncomfortably
The creamy whites of the early 20th century become more colourful, less romantic and then darker, as the three-and-a-half-hour production moves across some 30 years towards the time of the annexation of Austria by Adolf Hitler. Changes in furniture styles, from pre-Art Nouveau to Bauhaus metal tube chairs, mark the passage of time, as do historical references like the infantile recounting of the assassination of Archduke Ferdinand in Sarajevo in 1914 which sparked WW1,and which pushes Anne over the edge.

Rambert drew wry titters from the audience with the introduction of laptops which are so smart they can even connect the living and the dead.

The war poppy
Where does one find the beauty that the festival's artistic director Olivier Py strives for in all his endeavours in this utterly destructive Structure? In Rambert's use of language, both contemporary and poetical, in the loving and creative relationship between Denis and Audrey and in the Edwardian costumes and furniture design.